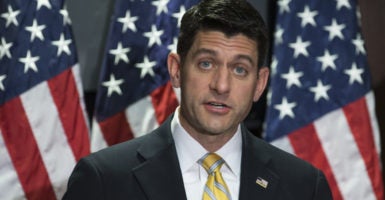 Any tax reforms passed by Congress should give relief to middle-class families and small businesses, bring jobs and capital back to the United States, and make the tax code more fair by ending loopholes and breaks for special interests, congressional Republicans said Wednesday in what they call a framework for debate.

“This is a historic day,” Ryan said at an afternoon press conference. “This is a day that is a long time in coming. In fact, it was on this day, under this dome, in 1986 that Congress took the final vote on the last overhaul of our tax code. That long. After that vote, President Reagan said Americans would ‘finally have a tax code that they can be proud of.’”

“It was true then, but things look very very different today, don’t they?” Ryan added. “Instead of a source of pride, our tax code has become a constant source of frustration. It is too big. It is too complicated, it’s too expensive. Today, we are taking the next step to liberate Americans from our broken tax code.”

Tax reform is all about more jobs, fairer taxes, and bigger paychecks for American families. This is a now or never moment. pic.twitter.com/ImHAeQ9pMe

“Tax reform that follows the outline we heard today will deliver significant benefits for all Americans,” Adam Michel, a tax policy analyst at The Heritage Foundation, said in an email to The Daily Signal, adding:

The outlined tax reform will raise wages, increase job creation, and create untold additional opportunities. The plan goes a long way toward fixing our business tax system that makes it hard for businesses to invest in America.

Today, we move one step closer to fixing our broken tax code so it puts Americans first. Read the full framework? https://t.co/9Z8dQE75VG

The three brackets in Republicans’ proposed tax framework are 12 percent, 25 percent, and 35 percent.

The framework would end personal exemptions for dependents and increase the child tax credit.

President Donald Trump has made overhauling the tax code a major agenda item during his first year in office, and Treasury Secretary Steven Mnuchin has promised to deliver it by the end of 2017, now three months away.

.@tedcruz: "Some of the early details are encouraging. The principles that should govern tax reform are growth, fairness and simplicity." pic.twitter.com/40PlDv2OFJ

The framework for tax reform would eliminate most itemized deductions, taken from a taxable adjusted gross income and “made up of deductions for money spent on certain goods and services throughout the year,” as Investopedia explains it.

The plan also calls for repeal of the estate tax—which opponents call the death tax—and the generation-skipping transfer tax, what the Tax Policy Center calls an “additional tax on a transfer of property.”

The plan includes tax benefits to incentivize work, higher education, and retirement security and promises to repeal many provisions “to make the system simpler and fairer for all families and individuals, and allow for lower tax rates.”

The framework also would:

The Republican plan also seeks to keep companies from moving overseas by taxing both businesses and foreign profits of U.S. corporations at a reduced rate.

“At first glance, the policies released today are good news to the American people,” Walker said in a formal statement. “I am proud to see that a large part of the Republican Study Committee’s submission to the tax reform task force was incorporated into today’s framework. We need to begin acting on this framework legislatively as soon as possible.”

>>> Commentary: Tax Reform Just Got Real. Why the GOP Plan is Great News.

Rep. Diane Black, R-Tenn., chairwoman of the House Budget Committee, said the goals would put America at an advantage:

By simplifying the system and getting the government out of the way of our free-market economy, America is made more competitive on an international scale and the potential for unprecedented job creation is unleashed. We believe this will be a catalyst for more jobs, bigger paychecks and fairer taxes—this framework is pro-America. Plain and simple.

“I’m encouraged to see that the administration is moving forward with tax cuts for small business,” Ortiz said in a statement provided to The Daily Signal, adding:

While many details still need to be filled in, this is a crucial and positive step in the right direction. Make no mistake: the recent progress in the campaign for tax relief should bring optimism to the 29 million small business owners and the roughly 56 million people that depend on them for their livelihoods.

In a statement provided to The Daily Signal, David McIntosh, president of the Club for Growth, said the plan will foster economic development.

“Club for Growth is very encouraged and pleased with the long-awaited tax reform outline that the Big Six released today,” McIntosh said. “Fundamental tax reform comes around only once in a generation, and this is our chance. The outline is both aggressive and very pro-growth with its rate reductions.”

Mike Needham, chief executive officer of Heritage Action for America, the lobbying affiliate of The Heritage Foundation, said the plan is a call to action.

“While today’s announcement marks an important and encouraging first step, it is imperative the administration and congressional leaders work hand-in-hand with conservatives to push back against the radical left and the special interests that will pull out every stop to preserve the status quo,” Needham said.

This report was updated to include Ryan’s afternoon remarks.