Trump Predicts Some Democrats Will Back Tax Plan 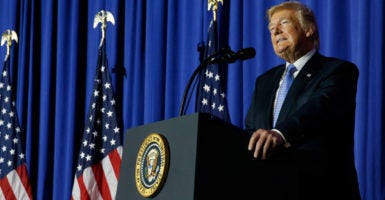 “We’re going to have numerous Democrats come across because it’s the right thing to do,” @POTUS says.

Speaking at the Indiana state fairgrounds in Indianapolis, Trump invoked tax reforms of predecessors Ronald Reagan, a Republican, and John F. Kennedy, a Democrat, to argue simplifying the tax code shouldn’t be partisan.

“I think they’re going to approve it. Actually, I think we’re going to have numerous Democrats come across because it’s the right thing to do,” Trump said.

However, House Minority Leader Nancy Pelosi, D-Calif., did not seem to have a strong interest in bipartisanship, attacking the plan in a statement and tweet.

Under the plan released by congressional Republicans earlier Wednesday, the first $12,000 of income for an individual and first $24,000 for a married couple would be tax free, and seven tax brackets would be consolidated into three. The tax code would be simplified to allow most payers to file on a single page. The corporate rate would decrease to 20 percent. Also, companies would be incentivized to stay in the United States.

“These reforms will be a dramatic change from the failed tax system that encourages American businesses to ship jobs to foreign countries,” Trump said. “Our competitors have much lower tax rates, but no longer. My administration strongly rejects this offshoring model and we have embraced a new model. It’s called the American model.”

Trump stressed Democrats have good reason to be on board.

“Tax reform has not historically been a partisan issue and it does not have to be a partisan issue today,” Trump said. “President Reagan’s tax cuts were passed with significant bipartisan majorities at a time when there was a Democratic majority in the House and a Democrat speaker, Tip O’Neill. Before that, Democrat President John F. Kennedy championed tax cuts that surged the economy and massively reduced unemployment.”

Trump said the tax plan would be a “miracle” for both middle-class families and American companies.

“I truly believe that many Democrats want to support our plan and with enough encouragement from the American people, they will find the courage to do what is right for our great country,” Trump said to applause.

Commentary: Tax Reform Just Got Real. Why the GOP Plan is Great News.