How Trump Can Clean Up the EPA’s Budget 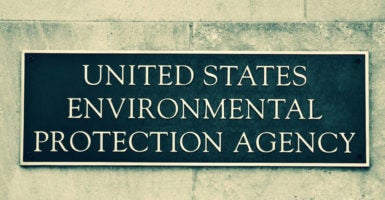 There were mixed signals from the White House on Tuesday about whether spending cuts or economic growth will fund the boost in defense spending that President Donald Trump reportedly will seek from Congress.

Either way, this is an opportune time to dramatically reduce excessive regulatory budgets—that of the Environmental Protection Agency foremost among them.

The White House on Monday sent budget outlines to federal agencies for comment, and the environmental lobby is in high dudgeon over a reported 24 percent proposed cut to the EPA’s $8 billion budget.

That would be generous compared to cuts proposed by members of Congress. For example, Rep. Sam Johnson, R-Texas, has introduced a bill to reduce wasteful EPA programs by $7.5 billion over 10 years, which certainly needs doing. Rep. Matt Gaetz, R-Fla., is proposing to eliminate the agency altogether.

In many respects, the need for an overhaul of the EPA has never been greater. The nation’s primary environmental statutes are woefully outdated and do not reflect current conditions. EPA officials routinely ignore regulatory costs, exaggerate benefits, and breach legislative and constitutional boundaries.

In addition, massive amounts of taxpayer dollars are lavished on useless schemes to avert global warming despite considerable uncertainty about the extent to which greenhouse gases—man-made or otherwise—affect climate.

>>>One Lawmaker’s Plan to Reform the EPA

The agency fared very well fiscally during the Obama administration. As a proportion of federal spending overall, the EPA budget is a mere 0.22 percent. But there are a great many costs related to agency actions that are not budgetary.

Unnecessary environmental regulation imposes incalculable costs in foregone innovation and economic growth, and the loss of private property rights and liberty. Despite dramatic gains in environmental quality, both the number and cost of federal regulations have been increasing for decades.

As a candidate, Trump pledged to “take a tremendous amount out” of the EPA. Let’s hope so.

Congress ought to start with elimination of nine climate-related programs for a savings of nearly $3.6 billion. These include:

Reductions in agency programs and responsibilities should lower overhead costs. A 10 percent reduction to the estimated $489 million in fiscal year 2018 funding for the EPA’s Facilities Infrastructure and Operations would save $49 million annually.

Congress should also reduce by at least 30 percent the $174 million in estimated fiscal year 2018 funding for the EPA Civil Enforcement program. The program litigates and settles administrative and civil judicial cases against serious violators of environmental laws.

However, the EPA engages in unnecessary and excessive legal actions. Therefore, a reduction in funding should impose an element of discipline to force the agency to be more careful about inviting legal challenges to regulatory and enforcement activities.

Hundreds of millions of dollars would be saved by devolving a variety of conservation activities to states and private property owners, or eliminating them altogether, including:

Dozens of other programs and agency activities are ripe for reform.

It is understandable why environmentalists, as one of Washington’s wealthiest and most powerful special-interest groups, want to preserve the status quo. But Trump pledged major reforms to federal regulation in general, and the EPA in particular.

It’s time to get it done.