One Lawmaker’s Plan to Reform the EPA 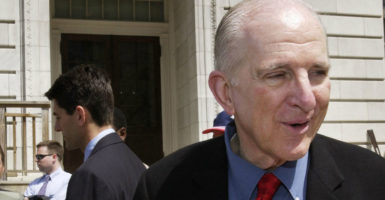 Rep. Sam Johnson, R-Texas, has introduced a bill that would roll back the excesses of the EPA. (Photo: Scott J. Ferrell /Congressional Quarterly/Newscom)

Americans, or at least those on the left, have become so accustomed to a heavy-handed Environmental Protection Agency that any adjustment not in the direction of even greater expansion seems to them “revolutionary.”

It should come as no surprise, then, that Texas Rep. Sam Johnson’s efforts to bring sanity back to an expansive EPA are being drubbed as a hateful attempt to wipe out the entire agency.

Johnson recently reintroduced the Wasteful EPA Programs Elimination Act to the new Congress. The bill would end a number of EPA programs, including:

This bill would save Americans billions of dollars. More importantly, it would restore freedom and responsibility to steward the environment back to states and individuals.

It seems that as the environment has gotten cleaner, the EPA has gotten more aggressive and expansive in its mission.

For example, air pollution has decreased dramatically since the EPA started keeping tabs in 1980. Ground-level ozone (smog) levels have fallen by 32 percent, nitrogen dioxide by 60 percent, carbon monoxide by 84 percent, and lead by 99 percent since 1980.

Problems in the EPA have abounded. New EPA regulations finalized between 2009 and 2015 created new annual costs of $54 billion. That’s more than all other federal agencies combined, and it exceeded claimed benefits by orders of magnitude.

The EPA has proved unaccountable to Americans in the face of its own environmental mismanagement during the Gold King Mine spill.

It has not addressed glaring discrepancies in the underlying science for some of its regulations, and has even misrepresented data from its own scientists. The EPA also refuses to release to Congress the underlying (taxpayer-funded) data for major regulations like the ozone standard.

The EPA has encroached into areas that traditionally have belonged to the states, expanding its own regulatory authority under the Clean Air Act to regulate greenhouse gases as part of a controversial effort to mitigate global warming.

It now regulates, or is attempting to regulate, greenhouse gas emissions (particularly carbon dioxide) from cars, trucks, buses, power plants, and airplanes. This is despite both former EPA Administrators Lisa Jackson and Gina McCarthy admitting that these regulations will have no impact on global temperatures.

As Heritage Foundation research fellow Daren Bakst further lists, the EPA has broken the law by:

The EPA’s faults are many, and reforming this rogue agency should not be seen as revolutionary. It is in fact long overdue.

Leaving the EPA as it currently is—in effect, acquiescing to its extreme and aggressive expansion—is simply not an option.