How Trump Can Curb the Power of Unelected Regulators 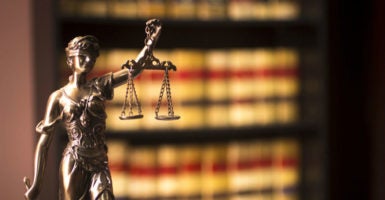 A federal appeals court recently chastised the National Labor Relations Board for engaging in frivolous lawsuits in order to intimidate other parties. (Photo: iStock Photos)

Daniel Cody is a research associate at the Competitive Enterprise Institute.

Do federal agencies face any limits on their power?

Recently, a federal appeals court ruled that Richard Cordray’s position as director of the Consumer Financial Protection Bureau is unconstitutional in its design because the position wielded immense authority over American businesses and consumers with little to no checks on that power.

As Circuit Judge Brett Kavanaugh wrote for the court: “The director enjoys more unilateral authority than any other officer in any of the three branches of the U.S. government, other than the president.”

The ruling is great news for anyone concerned about government accountability, especially for powerful, unelected regulators like Cordray. But the CFPB director is not alone. Other regulators hold immense power over Americans’ lives, yet face very little accountability.

President-elect Donald Trump has a golden opportunity to restrain other overzealous regulators. One place to start is at the National Labor Relations Board, which governs private-sector labor relations. Originally built to act as an impartial agency that represents the public in labor disputes, the agency has become overly political and prone to playing favorites.

The politicization of the NLRB is explained by a defect in the way the agency is constructed. The NLRB’s general counsel and board members are selected by the president and normally come directly from union or employer ranks.

Whichever party holds the executive office always appoints a majority of board members (with a predisposition to their preferred special interest), as well as the general counsel. Under the Obama administration, the NLRB has used every ounce of its power to benefit labor unions and disadvantage employers.

The most powerful position at the NLRB is its general counsel. In that role, Richard Griffin currently acts as gatekeeper. He decides what labor relations cases receive hearings and presses board members to overturn precedent—and board members have obliged in repeatedly changing the rules of the game.

Griffin has spent the last three years at the helm stretching the supposedly nonpartisan agency’s authority to its limits.

Recent research from Littler’s Workplace Policy Institute found that the Obama NLRB overturned a combined total of 4,559 years of board precedent. This is unsurprising, as prior to his time at the NLRB, Griffin held positions with labor unions going back to 1985.

Under the Obama administration, the NLRB has used its full arsenal of weapons—subpoenas, costly litigation, regulatory power, and majority power—to overturn long-standing precedents that the business community relies upon for planning and liability purposes.

The use of subpoenas has escalated. For example, in an ongoing case against McDonald’s, the board subpoenaed even more documents after the company had spent over $1 million producing more than 160,000 pages.

While restrictions on the NLRB’s subpoena power do exist, they have been largely discarded. The board is supposedly prohibited from issuing unduly burdensome or broad subpoenas.

However, in cases like McDonald’s that involve joint employer status, the NLRB has so broadened the definition of “joint employer” that almost any information sought via a subpoena is not considered excessive—even including proprietary information.

By expanding the definition of joint employer so broad as to include indirect control over another employer, nearly any bit of information on how companies operate and interact is considered potentially relevant, and therefore may be subpoenaed.

Further, court precedent has made the restrictions on NLRB subpoenas meaningless. In 2014, a Pennsylvania district court judge explicitly described a set of NLRB subpoenas as “overly broad,” “massive,” and “unduly burdensome,” and said that compliance would be “extensive, expensive, [and] time-consuming.”

Despite this, the judge upheld the subpoenas because recent court precedent forced him, in his words, to “rubber-stamp” the NLRB’s subpoenas.

Currently, the NLRB is free to issue these unrestricted subpoenas “merely on suspicion that the law is being violated, or even just because it wants assurance that it is not.”

The frightening reality is that this agency has expanded its authority to the point that it can now demand any business-related documents or testimony from anyone in the private sector, at any time it wants.

Massive and costly subpoenas are only one abuse the board has recently made common practice.

Recently, the U.S. Appeals Court for the District of Columbia found the board guilty of “bad faith litigation” and forced it to pay Michigan-based employer Heartland Health Care Center $17,649 to cover legal fees.

The reason for the “bad faith” ruling was that the board had dragged the employer through an expensive court case while knowing the employer would ultimately win.

The Board knew this because the case had already advanced as far as the appellate court in 2013 before a Supreme Court ruling forced the Board to stand down. The Supreme Court ruled that the president’s appointment of two NLRB board members during a Senate recess was unconstitutional, thus making the Board’s decisions invalid.

The appeals court’s opinion stated that the board pursued this case knowing it would lose because it wanted to send employers a message: “Even if we think you will win, we will still make you pay.”

This kind of bullying and intimidation of Americans by a federal agency must be shut down.

The incoming Trump administration has the opportunity to restore checks and balances on administrative agencies and appoint federal officials with integrity who will protect the rights of all Americans—not just their preferred special interests.