Over Half of Americans Want Trump Gone Before Inauguration Day 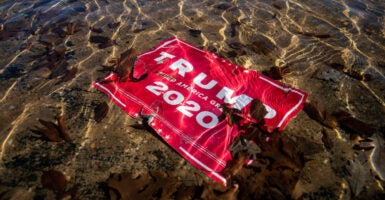 A campaign sign for President Donald Trump lies beneath water in the Capitol Reflecting Pool, near the West Front of the U.S. Capitol on Jan. 9, 2021 in Washington, D.C. (Photo: Al Drago/Getty Images)

Fifty-six percent of Americans want President Donald Trump out of office before Inauguration Day after rioters stormed the U.S. Capitol on Wednesday, according to a new ABC News/Ipsos poll.

Additionally, two-thirds of those surveyed said that Trump deserved “a great deal or a good amount” of blame for the riots, the poll showed. But while the majority of voters indicated that they wanted Trump gone before Jan. 20, Democrats and Republicans were sharply split on the issue, with 94% and 13% saying so respectively.

Trump has been accused of encouraging Wednesday’s riot after urging his supporters to march from the White House to the Capitol to pressure lawmakers to overturn President-elect Joe Biden’s victory.

“We’re going to walk down to the Capitol, and we’re going to cheer on our brave senators and congressmen and women,” Trump said on Wednesday. “We’re probably not going to be cheering so much for some of them because you’ll never take back our country with weakness. You have to show strength, and you have to be strong.”

The riots forced the Capitol into lockdown with lawmakers, staffers and reporters trapped inside, and resulted in dozens of arrests and 5 deaths.

Lawmakers, including some Republicans, have called for Trump’s removal, with some calling on Vice President Mike Pence to invoke the 25th Amendment and others calling for his impeachment. House Speaker Nancy Pelosi backed the effort last week, and the House plans to introduce articles of impeachment as soon as Monday.