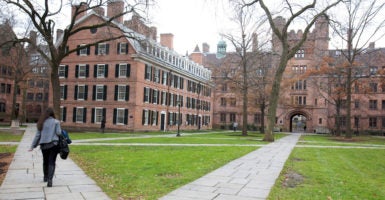 “I recognize that the terms ‘freshman’ and ‘upperclassmen’ are deeply ingrained in our everyday language and in Yale’s history,” wrote Marvin Chun, the dean of Yale College. (Photo: Michelle McLoughlin/Reuters /Newscom)

Yale University has taken another step to change the language there.

Marvin Chun, the dean of Yale College, posted an official statement on the college’s website Sept. 7, explaining the board’s decision to drop “freshman” and “upperclassmen” in favor of terms more gender-neutral.

Chun said the words “first-year” and “upper-level students” have been used by students since he joined the Dean’s Office this summer.

“I want you to know that this terminology now appears in the Undergraduate Regulations and the First-Year Handbook,” he wrote. “And my hope is that by the start of the 2018-2019 academic year, it will appear in all Yale College’s publications and communications.”

Chun added that the college doesn’t plan to compel staff and students to comply with the new terminology.

“I recognize that the terms ‘freshman’ and ‘upperclassmen’ are deeply ingrained in our everyday language and in Yale’s history,” he said. “And I expect that the members of our community, ourselves included, will continue to use these terms as they or we see fit, without feeling that anyone is out of compliance with an official policy.”

Yale does have official policies for staff on how to properly communicate with transgender students and care for their needs. The handbook, “A Guide to Gender-Identity & Affirmation in the Workplace,” was last revised in the fall of 2016. The handbook references the college’s nondiscrimination policy, which states that in no way does “Yale discriminate on the basis of sexual orientation or gender identity or expression.”

The handbook also asks staff to avoid “using language that makes light of, questions, belittles or stigmatizes anyone’s identity, including those in the gender-affirmation process.”

Some groups at the college have shown support for the decision. The Yale LGTBQ Affinity Group is an organization created in 2008 made up of Yale staff. According to the group’s website, its goal is “to foster a more welcoming and respectful campus community for Lesbian, Gay, Bisexual, Transgender, and Queer individuals and their allies with a primary focus on retention and edification” of Yale employees.

“We rarely have direct interaction with students,” said Florian Carle, co-chair of the group, “so our group has not been asked to take part [in] the discussions that lead to the change of terminologies. In general, our group is happy to advocate to change of [terminology] to better reflect the diversity and the inclusion of all the LGBTQ persons on campus.”

The Daily Signal was unable to reach the Dean’s Office or the Office of Public Affairs and Communications to ask about under what conditions failure to use gender-neutral terms might be considered defamatory or discriminatory.