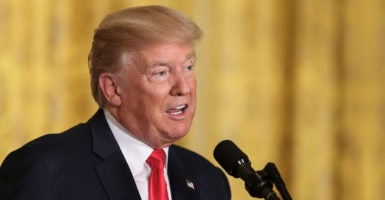 President Donald Trump's administration should firmly stake its ground at the U.N. on the issues of life and religious liberty. (Photo: Oliver Contreras/Sipa USA/Newscom)

On Tuesday, President Donald Trump will address the General Assembly of the United Nations for the first time when it opens its 72nd session.

While this General Assembly session opens before the backdrop of several ongoing international crises—such as North Korea’s nuclear provocations and continued conflicts in Syria and the Middle East—there are some other very specific threats to American sovereignty and values that demand the Trump administration’s attention this week.

The U.N.’s Human Rights Committee, charged with overseeing states’ compliance with the International Covenant on Civil and Political Rights, is currently drafting a general comment on the “right to life” found in Article 6 of the covenant.

The reason this matters is that once a U.N. treaty body, like the Human Rights Committee, issues a general comment on an issue, that comment is used to interpret how the treaty should be applied and becomes a reference point for future recommendations and judgments made by other international bodies

In addition, there is a pernicious trend among liberal justices of the U.S. Supreme Court to cite international law—including U.N. treaties—in decisions on American legal cases.

That is the case with the Human Rights Committee’s current draft comment on Article 6. As it is currently written, the comment would remove any legal protections of the right to life for unborn children. It interprets restrictions on abortion as a violation of a woman’s right to “enjoy a life with dignity.”

These are radical efforts even by Western standards. The United States does not federally recognize a right to assisted suicide, and abortion remains hotly contested among the population.

Moreover, other U.N. member states are far more conservative on these very issues. These efforts represent a threat to those nations’ sovereignty and self-determination.

Thankfully, there is still time to influence the Human Rights Committee. The U.S. still has the opportunity to submit recommendations for a few more weeks.

The U.S. should urge the committee to substantially change the problematic text of the general comment in order to protect the right to life for the unborn, and to remove language that calls for the elimination of restrictions on abortion or the approval of euthanasia and assisted suicide.

On the Islamic State’s ongoing genocide of Christians, Yazidis, and other religious minorities in Iraq and Syria, the Trump administration has been unequivocal.

Secretary of State Rex Tillerson recently said during the release of the 2016 International Religious Freedom Report:

The Trump administration has committed to addressing … conditions [of religious persecution and intolerance] in part by advancing international religious freedom around the world. The State Department will continue to advocate on behalf of those seeking to live their lives according to their faith.

This strong statement of U.S. support for religious freedom is welcome and necessary.

The Trump administration should also urge the U.N. to include Christians in its declarations on the genocide. The U.N. has condemned ISIS’ genocide of Yazidis, but has not yet included Christians, though there is ample evidence of ISIS mass killings, systematic rapes, and displacement of Christians in both Syria and Iraq.

The U.N.’s genocide determination will shape the structure and focus of any future international efforts to hold ISIS criminally accountable for its atrocities.

An essential element of the legal definition of genocide is evidence of specific intent (dolus specialis). In this case, there is no ambiguity. With the help of the global media and a robust online presence, ISIS has broadcast its intent to eliminate Christians from the “caliphate” across the world in real time.

The president and Ambassador Nikki Haley should press the U.N. to acknowledge ISIS’ genocide against Christians before they are extinguished from the region.

Another troubling trend at the U.N. could erode religious freedom around the world and its promotion of social policies relating to sexual orientation and gender identity (SOGI) and same-sex marriage.

U.N. entities have begun to interpret statements and reports to assert new protections on the basis of sexual orientation and gender identity to the existing human rights framework, even though only a limited number of nation-states have actually adopted such policies.

Where they exist, these laws have been used to violate the religious freedom of citizens who hold traditional views about marriage, sexuality, and biological sex.

For example, the European Court of Human Rights upheld the termination of both a public servant and a private employee from their jobs because their consciences forbade them from endorsing same-sex relationships by issuing marriage licenses and providing counseling in the context of such relationships.

The court reached this verdict even though both employees had co-workers who were willing to fill their roles for them.

In another case, the court found a family-owned bakery in Northern Ireland guilty of “discrimination” because it refused to make a cake that said, “Support gay marriage.” There are also alarming examples in Sweden and Denmark of criminal prosecutions against both Christians and Muslims who simply expressed dissent with regard to same-sex marriage.

By contrast, the International Covenant on Civil and Political Rights protects freedom of thought, conscience, and belief as one of seven “core human rights” that is nonderogable—that is, countries may not suspend these rights, even during times of emergency.

The U.S. should seize opportunities this week to strengthen conscience protections and restore commitment to religious freedom as a fundamental right.

This is particularly important for the health and independence of the U.S. judicial system in light of the Supreme Court’s citations to both the European Court of Human Rights and U.N. conventions in its opinions.

The late Justice Antonin Scalia once served as a bulwark against citations of international law. His absence now makes it even more important for the Trump administration to firmly stake its ground at the U.N. on the issues of life and religious liberty.

This will not only preserve every nation’s national sovereignty on hotly contested issues. It will also prevent illiberal ideas from encroaching upon the sovereignty of American law.