Trump: Rich Would Pay Same or More Under Tax Reform 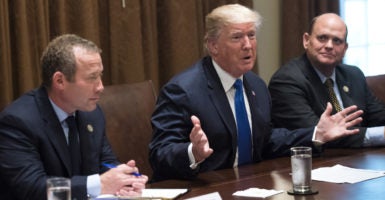 President Donald Trump speaks before a bipartisan meeting Wednesday with members of Congress at the White House, with Rep. Josh Gottheimer, D-N.J., to his right and Rep. Tom Reed, R-N.Y., on his left. The president talked about his goals for bipartisan deals on tax reform and immigration. (Photo: Kevin Dietsch/UPI/Newscom)

He emphasized, however, a strong commitment to slashing the corporate tax rate from the current rate of 39 percent to 15 percent, to make the United States more competitive internationally.

Trump held a bipartisan meeting with members of Congress in the Cabinet Room at the White House, where he talked about his tax reform proposal.

Trump does not have a specific tax reform plan as of yet, but has touted four broad principles of what he’d like it to include. Those principles  would simplify the system to make it possible to file taxes on a single page, slash the corporate rate, produce middle-class tax relief, and bring back revenue from companies that do business overseas and park their profits there.

Trump answered a reporter’s question regarding conservatives’ and Republicans’ skepticism of his working with Schumer and Pelosi. This comes a week after he made a deal with the two Democratic leaders to increase the debt ceiling—the government’s borrowing limit—as part of an aid package for Hurricane Harvey.

“I’m a conservative, and I’ll tell you, I’m not skeptical. I think if we can do things in a bipartisan manner, that will be great,” Trump said. “If you look at some of the greatest legislation ever passed, it was passed on a bipartisan manner. So that’s why we’re going to give it a chance. If it works out, great; if it doesn’t work out, great. Hopefully, we’ll be able to do it anyway as Republicans.”

Trump said he is sticking with his pledge to reduce the corporate tax rate to 15 percent.