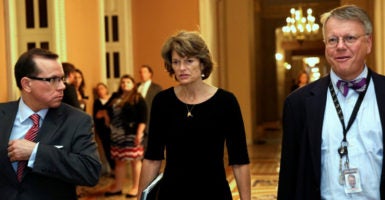 Sen. Lisa Murkowski, R-Alaska, is one of three Republicans who voted with Democrats to defeat an Obamacare repeal bill that would have set up a conference with the House. (Photo: Yuri Gripas/Reuters/Newscom)

Some Republicans in Alaska are frustrated that one of their own broke ranks to vote with Senate Democrats against repealing Obamacare.

Lisa Murkowski, Alaska’s senior U.S. senator, was one of three Republicans to join forces with Democrats to defeat the Senate bill that would have prompted a conference with the House on how to repeal the health care law.

Murkowski joined Susan Collins of Maine and John McCain of Arizona as the Senate Republicans whose votes July 28 allowed Democrats to block movement toward repeal.

This week, after a break back home, Murkowski is in Washington again as a member of a key Senate committee, listening to state health insurance commissioners and governors talk about the need to “stabilize” premiums in the individual insurance market under Obamacare.

Lance Roberts, ombudsman for the Fairbanks North Star Borough, told The Daily Signal in an interview that conservatives aren’t happy with Murkowski.

We’ve got our local fair going on right now, and the Republican booth and people come by constantly complaining about what Lisa Murkowski did. She really put us in a bad situation because in Alaska, we are one of the states hit hardest by Obamacare. Our [health insurance] rates have gone up incredibly, driving people to move out of state because the rates are so bad.

President Donald Trump repeatedly has expressed his disappointment in Senate Majority Leader Mitch McConnell, R-Ky., for not rounding up 50 of the 52 Republican senators to move an Obamacare repeal plan to the House with Vice President Mike Pence’s tie-breaking vote.

Russ Millette, elected chairman of the Alaska Republican Party in 2012, told The Daily Signal in an email that Murkowski voted to keep Obamacare for partisan reasons.

“The reason, in my opinion, that she voted for [Obamacare] is that she’s not a Republican, she’s not a conservative, she’s a liberal, pragmatic Democrat,” Millette said, adding:

Lisa did what she had to do to stay in office. The Democrats got her in, the Native vote got her in, and all the people that benefit from the federal government got her in. She is not a conservative, that’s as plain and simple as I can tell you. She voted to stay in power so she can keep power and have money coming in, that’s why she did it.

Happy #AlaskaWildSalmonDay ! I hope everyone has a chance to enjoy some delicious salmon today! pic.twitter.com/Swtou4JNuD

Murkowski’s father, Frank Murkowski, appointed her to his Senate seat in 2002 after the Republican resigned it to become governor of Alaska. She recently had been chosen majority leader in the Alaska House of Representatives for the 2003–2004 legislative session, but resigned before assuming that office after the appointment by her father.

Amy Demboski, a member of the nonpartisan Anchorage Municipal Assembly, recalled the move by Murkowski’s father in an interview with The Daily Signal.

“He ran for governor of Alaska and he won, and back then, the Alaska law dictated that the governor of the state would appoint the replacement, and he appointed his own daughter,” Demboski said.

After running for and winning a full term in 2004, Murkowski failed to get the Alaska Republican Party’s nomination for re-election in 2010. She lost to tea party candidate Joe Miller.

Murkowski then ran a write-in campaign and prevailed, becoming the first write-in candidate elected to the Senate since Strom Thurmond of South Carolina in 1954, as The New York Times reported. Re-elected in 2016, Murkowski, 60, is chairman of the Senate Energy and Natural Resources Committee. She also is a member of the Committee on Health, Education, Labor and Pensions, which was scheduled to hear testimony from state insurance commissioners and governors Wednesday and Thursday on how to stabilize premiums in the individual insurance market.

Obamacare has not done the state of Alaska well, said Walton, the GOP’s executive director.

Premiums for single coverage in Alaska rose to “a whopping $760 per month,” as USA Today reported in May.

Obamacare has seen premiums in the states rise by over 200 percent … our health care costs are already more expensive than any other state in the country. So Obamacare has been terrible and Alaskans are very frustrated with that and would like to see it gone.

The Alaska Dispatch News reported that Murkowski said she voted no July 28 on Senate Republicans’ so-called “skinny repeal” of Obamacare because she was not satisfied with how the process was playing out.

“I voted no on the motion to proceed today because I didn’t think that we were ready for the debate,” Murkowski said, adding:

And I have said pretty consistently that process really does matter, particularly when you’re dealing with something that is as direct and personal as health care, something that has an impact on one-sixth of the nation’s economy.

Murkowski defended her vote in a prepared statement the same day. She said “both sides must do better on process and substance,”  adding:

The Affordable Care Act remains a flawed law that I am committed to reforming with a structure that works better for all Americans. But to do that, the Senate must fully devote itself to an effort to improve the healthcare system in this country, reduce costs, increase access, and deliver the quality of care that our families want and deserve.

Here is my following statement on the healthcare bill: pic.twitter.com/vNlGf8G3Uu

Murkowski’s vote didn’t register well with conservatives, including those who aren’t politically active, said Miller, the lawyer, libertarian, and tea party candidate who denied Murkowski the GOP nomination in 2010 and won the primary only to lose the general election to her.

“There are some on the ground in Alaska [who] because of Murkowski’s action have been kind of shaken in their complacency,” Miller said in an interview with The Daily Signal. “There is always a percentage of people that are not all that engaged, who aren’t paying attention, or only seem to get impetus during an election season.”

Murkowski’s office did not respond to requests from The Daily Signal for comment by publication deadline, other than pointing to her July 28 statement.

Miller, who also ran against Murkowski in 2016, said people have told him in person that they were stunned by Murkowski’s vote to keep Obamacare:

I talked to a doctor yesterday, he had just gotten out of an appointment with my wife, and he immediately recognized who I was and said, ‘Oh, Joe Miller,’ and he just began to become so apologetic. He said, ‘I got to tell you how sorry I am about voting for Lisa Murkowski. I thought she was telling the truth when she said she wanted to repeal Obamacare.’

In the 2016 rematch, Murkowski defeated Miller by 15 points, but with nearly 30 percent of the vote the challenger rolled up record support for a Libertarian in a Senate race, Eric Ostermeier reported on his Smart Politics website.

“This marks the third consecutive cycle in which Murkowski won election to the Senate with a majority of voters backing another candidate—a feat never before achieved in U.S. history,” Ostermeier wrote.

If Murkowski chooses to seek re-election in 2022, Miller said, it will be her day of reckoning with Alaska’s voters.

After 10 hrs flying X-country it was good to get out biking and end w/ refreshments @ neighborhood lemonade stand. pic.twitter.com/gMflWJQPtI

“The real question is, are people going to remember this in 2022?” Miller said. “And part of the problem, of course, is voters have a short-term memory. Murkowski is part of this corrupt machine, she’ll have millions of dollars again in 2022, and she’ll be able to lie yet again; at least, that is kind of the perspective of the more skeptical.”

Murkowski defied McConnell on the Obamacare repeal vote even though the Senate majority leader had helped prop up insurance companies in Alaska, as Salon reported two weeks earlier.

“Health costs in Alaska are significantly higher than the rest of the nation,” it noted.

Miller said voters are likelier to remember Murkowski chose to keep Obamacare at this juncture.

“I think Alaska is waking up,” Miller said, adding:

There has been an awakening under way since the tea party wave in 2010. And I think that that is going to continue, especially as we see the push back by RINOs against the Trump agenda and especially as we continue to see the corruption that the alternative media is letting people know about. I do believe that is going to have an impact and create a level of activism that we haven’t seen before.

Happy we have more time to address Alaskan priorities in the healthcare bill. This was a good step. As I said before, we need to do it right pic.twitter.com/79dbhOgTsZ

But not all Alaskans were disappointed in Murkowski’s vote.

The next day, supporters rallied in Anchorage to thank her. Alaska Dispatch News reported:

Many carried signs expressing gratitude at Murkowski’s ‘no’ vote. Cynthia Parkin, 50, carried a sign that said ‘R=Resist,’ a reference to Murkowski as a Republican.

‘I know Lisa just went against the grain,’ said Parkin, who said she typically votes for Democrats and has not voted for Murkowski in the past. ‘She needs to hear from her constituents.’

Demboski, the Anchorage Municipal Assembly member who also has a radio talk show, told The Daily Signal that conservatives in Alaska will not forget Murkowski’s vote to preserve Obamacare.

She can’t hide behind the GOP skirt any more. It is very clear, when the time was right and there was a president in the White House that would have repealed Obamacare, Lisa Murkowski stood with the Democrats.