Alaska Governor Shares His Vision to Keep Government in Check 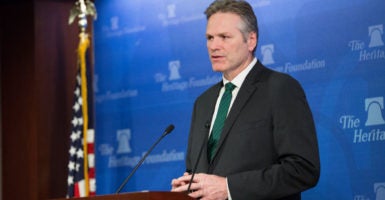 "As a conservative, you're always looking at that to make sure that you keep that government in check and you keep money in the pockets of people.," says Gov. DUnleavy. (Photo: Willis Bretz for The Heritage Foundation)

Is Alaska a model of success for the rest of the country?

Virginia Allen speaks with Alaska Gov. Michael Dunleavy, who took office in December 2018. Dunleavy, a Republican, talks about how he is working to make the state more fiscally responsible, why he sent National Guard troops from Alaska to the U.S.-Mexico border, and his education reforms in the Land of the Midnight Sun. Read a lightly edited transcript of the interview, posted below, or listen on the podcast:

We also cover the next step in impeachment, the Supreme Court’s refusal to hear a case on homelessness. and a proposal to raise the legal age for smoking.

The Daily Signal podcast is available on Ricochet, iTunes, Pippa, Google Play, or Stitcher. All of our podcasts can be found at DailySignal.com/podcasts. If you like what you hear, please leave a review. You can also leave us a message at 202-608-6205 or write us at letters@dailysignal.com. Enjoy the show!

Gov. Mike Dunleavy: Well, as you said, we were spending our savings because our revenue had decreased as a result of the drop in oil prices and production. Alaska is an oil state. So we had a budget gap of about $1.6 billion and we presented a $1.6 billion potential rollback. In other words, these would be the areas that you would cut, reduce, or somehow modify in order to close that gap.

It was met by a number of Alaskans, including groups, with opposition. They opposed it for the most part, many Alaskans, not all. The majority of Alaskans wanted the budget deficit reduced. They want us to work on reining in spending.

And so in the end, after a long and somewhat contentious session, we were able to reduce the budget by about $650 million, which was the largest reduction in the state’s history. And … when we rolled into this year, we also presented a budget that does not increase spending. So it consolidates our gains. Now we have to look at rolling back those formula programs that will constantly put pressure to grow the budget. So that’s our big task this year.

Allen: And how did transparency in budgeting as well as budget discipline in a state that does have a difficult fiscal landscape play a role in what you’ve done to put Alaska’s fiscal train back on track?

So we want to make sure that they understood what all went into the budget. We want to make sure that we were not playing games with the budget, misrepresenting budget sources or the revenue outlook, etc. … Because in the end, we are not going to be able to put together a sustainable and permanent fiscal fix for the state of Alaska without the help of the Alaskan people.

So presenting the budget as a real honest budget was crucial. And so again, we have continued that process this year. We will be going out and speaking with Alaskans all over the state to ask them, what kind of Alaska do they want for the future? What are the services and programs they want for the future for their kids and grandkids? And we’re looking forward to a robust discussion and some good ideas from the people of Alaska.

Allen: Yeah, it’s so critical. Let’s talk for a moment about our southern border. You sent troops to help America guard the southern border this year. How does the border crisis affect your home state of Alaska?

Alaska is also one of those states that oftentimes we suffer from natural disasters, earthquakes, volcanoes, fires, and so we want to do our part to help the country because when we’re in trouble, other states and the federal government help us.

Allen: That’s a great perspective to have. Now, you pushed Alaska to comply with the Supreme Court Janus decision, which said government employees need to opt into unions and not automatically be forced to do so. Why was this so important to you?

Dunleavy: Because we want to follow the Supreme Court law. We also believe in free association First Amendment rights. Alaska is … a heavily unionized state and I have no issue with the unions, but when you have a Supreme Court ruling and you have a free association First Amendment issue, you want to make sure that employees have the right and they understand what their rights are, whether they should opt in or opt out if they want to be part of the union.

Allen: You recently endorsed the USMCA [United States-Mexico-Canada Agreement] deal on Twitter saying that it will create jobs, grow the economy, and that it’s especially good for Alaska. What specific potential do you see for Alaska here?

Dunleavy: Well, we have a very robust fishing industry, for example, amongst others, and we have some of the busiest fishing ports in the country. We do a lot of business with Asia. We want to make sure that our fishing industry is protected and that under USMCA that rules and regulations regarding fishing of both the interception and the capture of fish on the seas is protected, but also our ability to trade with other countries, sell our fish to other countries without having a lot of barriers put in place to impact that trade in a negative way. So that’s just one example, a fishing industry.

We’re trying to stand up a growing timber industry. We are isolated in the Northwest part of North America. We do have the potential to do a lot of trade with Asia, but we also trade with Canada and Mexico. And so the USMCA, we think, is going to help not just this country, but Alaska being part of the country will help Alaska as well.

Allen: Yeah. And governor, do you consider yourself a conservative and if so, how does that perspective affect the way that you make decisions as governor?

Dunleavy: I do. And if you’re a conservative, you put the rights and the needs of the individual first and foremost. You make sure that you have a check on a growing government that wants to take more out of your pocket, but also take away your liberties and your rights.

And there’s a constant move in that direction. I mean, the Founding Fathers warned about this, that government would grow. A government has a tendency to want to take rights away from people and become too big in the lives of folks.

And so as a conservative, you’re always looking at that to make sure that you keep that government in check and you keep money in the pockets of people.

You also want to grow a private sector that grows faster than government for a whole host of reasons. But again, following the Constitution, making sure the individual rights are protected and making sure that the hard-earned money that they earn is kept in their pocket to the extent possible.

Allen: And as you’ve mentioned, Alaska does have a wealth of opportunities that the state can provide for the nation such as oil and gas. What are some of these opportunities that you’d like to highlight and how do you specifically see them enriching the state?

Dunleavy: So for the longest time Alaska was viewed as a resource state, which it is and it should be. We have timber, we have fish, we have oil, we have gas, lead, zinc, oil, we have rare earths. We have one of the largest graphite mines recently discovered in Alaska. All of these resources will contribute to a growing economy, not just in the country, but worldwide. And some of our rare earths and, again, some of our other minerals are going to be key components in any renewable push, for example, in batteries and electronics.

But [our] location serves us well. Alaska is centrally located in the world and a lot of folks don’t realize that we are the furthest Western state, furthest Northern state. We’re also the furthest Eastern state because part of the Aleutian Islands … pushes through 180 degrees longitude into the Eastern hemisphere.

We’re nine hours by plane to any industrialized place in the Northern Hemisphere and so we are positioned for travel and shipment. For example, our international airport is the second-busiest cargo airport in the country and the fifth-busiest in the world. And so we are on the transportation routes for both a flight and a growing shipping industry as well.

Allen: Governor, last question I would like to touch on today is around education. You’re a former educator, principal, and superintendent and you’ve mentioned on Twitter that this past year your administration worked with school districts to make positive changes to our education system, benefiting students, parents, and teachers. What did that look like?

Dunleavy: Well, we are going to be emphasizing reading. In other words, we need to have all of our students reading at grade level by grade 3. This is a moral imperative. A comprehensive reading coherency is absolutely key in making sure that students have the tools to be able to progress through grades, but also it opens up the world to them.

We’re also going to ensure that students are proficient knowledgeable by the time they leave eighth grade. This is also a gatekeeper course for mathematics, STEM, engineering, you name it. If we can have our students performing at grade level in reading and an algebra proficiency, our kids are going to be well positioned to compete in this world.

Allen: Gov. Dunleavy, thank you so much for joining The Daily Signal Podcast. We really appreciate your time.

Dunleavy: Thanks for having me.