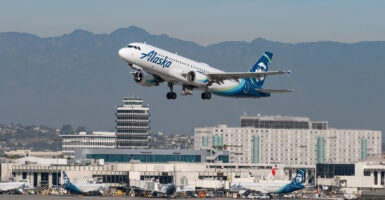 An Alaska Airlines Airbus A320-214 takes off from Los Angeles International Airport on Jan. 13, 2021. It's not "all aboard" at Alaska Airlines, not if you oppose radical LGBT legislation, as two former flight attendants found out the hard way. They were fired, but are now suing. (Photo: AaronP/Bauer-Griffin/GC Images/Getty Images)

Two flight attendants are fighting back after Alaska Airlines fired them because they dared to question the validity of the proposed federal Equality Act in a company forum.

First Liberty Institute on Tuesday filed a federal lawsuit on behalf of Marli Brown and Lacey Smith on grounds of religious discrimination with the Equal Employment Opportunity Commission against Alaska Airlines.

In February 2021, Alaska Airlines announced on an internal employee message board it was going to support passage of the federal Equality Act. If enacted, the Equality Act would amend the 1964 Civil Rights Act and Fair Housing Act to include sexual orientation and gender identity as protected classes. Employees were invited to comment.

Smith asked: “As a company, do you think it’s possible to regulate morality?”

After much prayer and thought, Brown posted a lengthy comment on the company’s message board based on what she’d read in the article:

Does Alaska support: endangering the Church, encouraging suppression of religious freedom, obliterating [women’s] rights and parental rights? This act will [force] every American to agree with controversial government-imposed ideology … or be treated as an outlaw.

The Equality Act would affect everything from girls’ and women’s showers and locker rooms to women’s shelters and women’s prisons, endangering safety and diminishing privacy.

Giving people blanket permission to enter private spaces for the opposite sex enables sexual predators to exploit the rules and gain easy access to victims. This is Equality Act …

The rest of Brown’s post was cut off due to character limitation. Her comments reflect her belief that the Equality Act would result in the violation of legal protections in the Civil Rights Act for religious people like her and for other girls and women.

Alaska Airlines didn’t need to enforce the Equality Act for Brown’s concerns to turn out to be true.

After the women posted their questions in good faith, Alaska Airlines launched an investigation, and they were eventually fired. The airline said the flight attendants had made “discriminatory” and “offensive” comments.

Your posting was offensive, discriminatory, and did not align with Alaska Airline’s values.

It is a blatant violation of state and federal civil rights laws to discriminate against someone in the workplace because of their religious beliefs and expression.

‘Woke’ corporations like Alaska Airlines think that they do not have to follow the law and can fire employees if they simply don’t like their religious beliefs.

This is another appalling example of the way big corporations that embrace the new “woke” standards on sexuality and gender identity treat employees with orthodox and traditional beliefs.

Instead of truly demonstrating inclusivity and diversity by treating all employees of all races, creeds, and beliefs equally, big corporations discriminate against—and even fire—those with orthodox views.

Those would be the very views Smith and Brown were worried would be squelched because of the Equality Act if it were to pass. It passed the House, but was filibustered in the Senate.

These two women were courageous to thoughtfully question today’s political dogma wrapped in a policy touted by the left. They are even more courageous now to stand up to their employer after being fired for their beliefs and concerns.

The firing of Brown and Smith for standing up for their Christian faith in the public sphere and questioning “progressive” policies is a flagrant violation of Title VII of federal law, which “prohibits discrimination based on race, sex, religion, color, and national origin.”

It’s disheartening to see anti-discrimination laws meant to protect people weaponized against those who are either religious or politically conservative, or who simply fail to march in lockstep with the left’s political and social agenda.