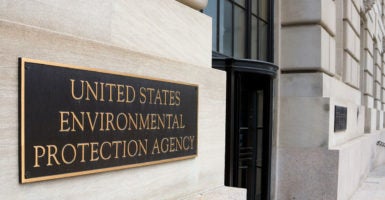 The EPA has withdrawn the Obama administration's pre-emptive veto of the Pebble Mine, allowing the permitting process to move forward. (Photo: Skyhobo/Getty Images)

Patricia Patnode is a member of the Young Leaders Program at The Heritage Foundation.

For more than a decade, the owners of Alaska’s Pebble Mine just wanted a shot at going through the permitting phase of the project. But before the mine’s owners could even submit a permit application, the federal government in effect said, “Don’t bother.”

The Environmental Protection Agency, however, announced last Wednesday its intention to withdraw the Obama administration’s preemptive rejection of the Pebble Mine project and to move forward with a transparent, fact-based permit process.

Pebble Mine has an abundance of copper, gold, and molybdenum. Molybdenum is one of many rare earth minerals that the U.S. has beneath its soil. These elements are critical in numerous industries (from cellphones to electric batteries to military weapons) because of their relative strength, light weight, and highly conductive properties.

In the case of the Pebble Mine, the Obama administration prohibited the mining project from moving through the application process in 2014 by issuing a preemptive veto of the project, citing concerns over disposal of materials into Alaska’s Bristol Bay watershed.

The Obama EPA’s proposed determination was essentially a conviction without investigation, arguing that the project would threaten Bristol Bay, which is home to the world’s largest commercial sockeye salmon fishery.

However, the agency’s proposed determination blocked the project, based on an environmental analysis of a theoretical mine that would not come close to meeting state and federal standards for mining activities.

As The Wall Street Journal put it, “The Obama EPA ginned up a phony study based on a hypothetical mine to create a worst-case scenario and justify its veto.”

The normal process for obtaining a permit would be for the Army Corps of Engineers to release an environmental impact statement before approving or denying construction plans.

However, the Army Corps preemptively vetoed the mining project even before it performed its environmental evaluations and impact assessment, which is required for projects that would discharge materials into the waters of the United States.

The decision was like a teacher failing a student before he or she even takes the test.

Not only was the move unprecedented, it also set a dangerous precedent going forward that the federal government could rely on faulty science to subjectively block certain projects.

A “keep it in the ground” administration could use that as a regulatory weapon to block all kinds of natural resource development.

The House Committee on Science, Space, and Technology held several hearings regarding the Bristol Bay assessment and resulting proposed determination.

Rep. Randy Weber, R-Texas, characterized the situation between the Pebble Mine and the EPA thusly: “That’s the juror to the judge: ‘Judge, let’s give him a fair trial and then hang him.’”

Pebble Limited Partnership challenged the decision in court, ultimately resulting in the court issuing a preliminary injunction against the EPA.

All outstanding lawsuits between the two parties were resolved in a 2017 settlement. In the settlement, the EPA agreed to not advance in its review process under the Clean Water Act until the Army Corps of Engineers had conducted the appropriate studies. The EPA as a result announced its withdrawal of the proposed determination.

The Pebble Mine rolled forward with new plans for a mine with a lesser environmental impact than its original mining operation plan.

Pebble applied for permit reviews with the Army Corps weeks after the November 2017 court settlement, only to have the EPA go back on its word and announce it was suspending its withdrawal of the proposed determination in January 2018, effectively keeping the preemptive veto in place.

The ambiguity surrounding the EPA’s “will they, won’t they?” was decidedly resolved by Alaska’s EPA regional administrator on July 30,  when he announced the withdrawal of the 2014 proposed determination and a return to the established Army Corps and EPA permit path.

Congress should prohibit rogue agencies from issuing preemptive vetoes to ensure that environmental assessments actually comport with environmental protection, rather than arbitrarily denying projects an administration might not like.