I Went to a Vandalized Columbus Monument. Here’s What I Saw. 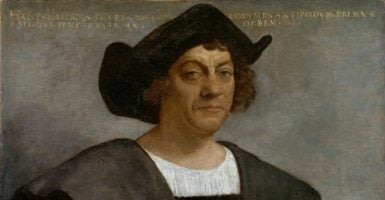 In 1492, Christopher Columbus sailed from Spain to the New World and opened up a world-changing mass migration. In 2017, monuments to his accomplishments are being targeted for destruction. (Photo: Fine Art Images Heritage Images/Newscom)

The debate over whether or not to tear down Confederate statues deemed offensive has quickly moved on to other historical figures.

Christopher Columbus, the Italian sailor who opened up the New World to migration from the Old, is now in the crosshairs of protesters and vandals.

What is likely the oldest monument to Columbus in the United States was targeted and badly damaged by vandals on Monday night. A YouTube video of a man taking a sledgehammer to the front of the 225-year-old statue at a park in Baltimore, Maryland, was posted online.

>>> Here Are 8 Monuments That Have Been Attacked Since Charlottesville

At one time in American history, Columbus was almost universally admired. He was so celebrated that our capital city, the District of Columbia, was named after him, and “Hail Columbia” almost became our national anthem before it was superseded by “The Star Spangled Banner.”

Columbus Day was proclaimed as a national holiday by President Benjamin Harrison in 1892—for the 400-year anniversary of the explorer’s arrival in the Americas.

But Columbus has now been painted as a genocidal monster and a villain.

New York Mayor Bill de Blasio is having a review conducted to consider removing a 76-foot Columbus statue from Columbus Circle. Numerous other cities are re-examining their Columbus statues.

I made a trip to see the defaced Baltimore statue on Wednesday and spoke about the ongoing attacks on historic monuments that have ratcheted up since the incident that took place in Charlottesville, Virginia, earlier this month. Watch the video above.