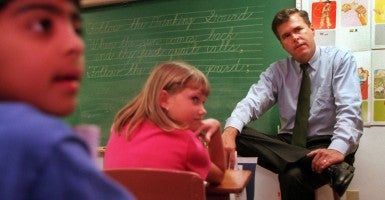 Now that the former Florida governor has all but confirmed his plans to run for president in 2016, the issue threatens to overshadow his likely campaign.

Bush’s longstanding support for Common Core is no secret: Over a year ago, Frederick M. Hess, an education expert at the American Enterprise Institute, predicted that if he decided to run for president, “Common Core could be his Romneycare.”

What is Common Core?

Common Core standards were created by the National Governors Association and Council of Chief State School Officers, and funded by the Bill and Melinda Gates Foundation. The goal, supported by the Obama administration, was to increase education standards in America.

Among conservatives, however, the issue is one of the most controversial. Several politicians have flip-flopped on the issue, pulling their support or even abandoning the standards in their states.

The Heritage Foundation is among the organizations that have rallied against Common Core.

The crux of the argument, as laid out by Heritage’s Lindsey M. Burke and Jennifer A. Marshall, is this:

National standards are unlikely to make public schools accountable to families; rather, they are more likely to make schools responsive to Washington, D.C. Furthermore, a national accountability system would be a one-size-fits-all approach that tends toward mediocrity and standardization, undercutting the pockets of excellence that currently exists.

Many of Bush’s deep-pocketed GOP allies—so-called “establishment” Republicans like the U.S. Chamber of Commerce—don’t see eye-to-eye with conservatives on the issue.

Federal incentives like Race to the Top grants and No Child Left Behind waivers for states that adopted Common Core topped off what critics call “a national takeover of education policy.”

During his eight-year tenure as the Sunshine State’s governor, he led one of the most successful education reforms in the country. In fact, his efforts were so effective, education experts are still trying to analyze them to this day.

Schools and districts in Florida are now graded on a straightforward A-to-F scale where parents easily understand that it’s better to have a child in an A-rated school than one that received an F.

Education experts often argue that no one has a greater, more genuine interest in a student’s education than their parents.

But as Burke, Heritage’s leading expert on education policy, pointed out, what worked in Florida might not work on a national scale. She said:

Gov. Bush was a leader on education reform in Florida during his tenure. Florida, in fact, has stood as a model for other states. The challenge for national policymakers is to recognize that what worked well in one state might not work as well in another, and that states need flexibility to find out what works best for the unique students who reside there.

The challenge for national policymakers is to recognize that what worked well in one state might not work as well in another. @lindseymburke

The Common Core State Standards define what students need to know; they do not define how teachers should teach, or how students should learn. That is up to each state. And they are built on what we have learned from high-performing international competitors as well as the best practices in leading states.

Over the course of the next three years, Bush, with the Foundation for Excellence in Education, an education policy think tank that Bush founded and chairs, encouraged state legislators to adopt the standards.

For example, in early 2013, Bush and his foundation set out to remind Oklahoma state legislators of the “myths” surrounding Common Core.

He sent them an in-depth email, which can be viewed in its entirety here. In it, they wrote:

There is a lot of misinformation flying around about Common Core State Standards. Below is a roundup of recent articles, opinion pieces and posts by policy advisors, debunking Common Core myths and highlighting voices in the transition to these new standards. You’ll also find quotes from teachers weighing in on Common Core and see how state and business leaders are supporting the higher standards.

More recently, Bush has toned down his support.

In a speech last month at the 2014 National Summit on Education Reform—just one week before Thanksgiving when he pondered a presidential run with his family—Bush argued, “The rigor of the Common Core State Standards must be the new minimum in the classrooms.”

But in the same speech, he also made it a point to acknowledge the disagreement on the issue—something he has been criticized in the past for ignoring.

Even if we don’t all agree on Common Core, there are more important principles for us to agree on. We need to pull together whenever we can. It starts with a basic question: If we were designing our school system from scratch, what would it look like?

I know one thing: We wouldn’t start with more than 13,000 government-run, unionized and politicized monopolies who trap good teachers, administrators and struggling students in a system nobody can escape.

We would be insane if we recreated what we have today.

So let’s think and act like we are starting from scratch.

Whether his 2016 campaign will try to downplay his support for Common Core or remain true to his position is not yet clear, but one thing is for certain: A Bush on the 2016 presidential ticket will once again bring education to the forefront of the national debate.