Not Too Late to Prevent ‘Death of Europe,’ British Author Says 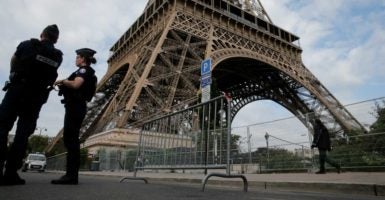 Europe’s migration crisis is a lesson in historical and philosophical degeneration, a best-selling British author argues.

“Almost everything in this book is also a warning, in my view, to America,” said Douglas Murray, author of “The Strange Death of Europe: Immigration, Identity, Islam,” in remarks earlier this summer at The Heritage Foundation.

“All the things I described in my book are processes, which are the same ones that I think [are] happening in this country,” he said.

Murray is the founder of the British think tank Centre for Social Cohesion, now part of another think tank, the Henry Jackson Society. A journalist and commentator who is an associate editor of the conservative British magazine The Spectator, he argued in his speech that Europe has become resigned to a broken immigration system, which ultimately will mean passing down “a total mess.”

To solve the problem, he said, Europeans must ask two questions: “Who is Europe for?” and “What are we doing?”

Who Is Europe For?

Europeans are “profoundly confused and embarrassed” by this first question, Murray said.

In September 2016, Pew Research Center published an article, “European Opinions of the Refugee Crisis in 5 Charts,” spotlighting how majorities in 10 European countries disapprove of the European Union’s management of refugees. The numbers include 94 percent in Greece, 77 percent in Italy, 70 percent in the United Kingdom, and 67 percent in Germany.

Murray referred to this common sentiment as “anti-immigration, but not anti-immigrant.” But, he said, the problem extends beyond the war in Syria.

The author recalled recent travels to immigration entry points, to “see human faces and speak to the humans” in the mass movement toward Europe. He said firsthand experience revealed that Europeans make a “major mistake” by assuming most, if not all, immigrants are Syrian refugees.

Afghans submitted the second-largest number of first-time asylum applications in 2015, according to BBC News.

“‘Why should Syrian migrants get privilege? They’ve had a civil war for five years. We’ve had one for 15,’” Murray said one Afghan man asked him.

What Are We Doing Here?

The “Tyranny of Guilt,” a concept coined by French philosopher Pascal Bruckner, has undermined Europe’s sense of self, Murray said. Europe has punished itself for standards to which it does not hold the rest of the world, he said:

I’ve particularly never heard, for instance, that the country of Turkey should have a large infusion of Yorkshiremen or people from Wales, Dublin, in order to not only diversify that country but to make some kind of reparation for the Ottoman Empire.

Murray said European culture is changing because migration to European countries does not mean automatic acceptance of that culture.

“We’ve taken a very strange, unhistorical, and uninformed approach in recent years, which is to basically think that when somebody walks into Europe, they become as European as the next person,” Murray said.

This, he argued, is not so.

A majority of those surveyed in eight of 10 European countries said they believe Muslims “do not want to adopt our customs and way of life,” according to a Pew Research Center poll published in July 2016.

“Islam is the most important challenge to the values vacuum in Europe,” Murray said. “The effects of it are obviously most visibly seen now, where terrorist attacks happen every few days.”

To preserve their culture, he said, Europeans must define themselves more precisely.