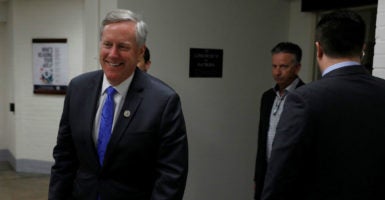 The chairman of a conservative House caucus said Wednesday that he wants tax reform to be so bold and sweeping that IRS employees will be looking for jobs.

“We need to be bold,” Rep. Mark Meadows, R-N.C., chairman of the House Freedom Caucus, said at an event sponsored by Meadows and Americans for Prosperity at the Newseum in Washington, D.C. “A few blocks from here is a building called the Internal Revenue Service. … What a great message we could send them if we start to simplify the tax code where we could fill it out on a postcard, where we don’t have to go any further, and we send a lot of those people who work a few blocks from here home because they are not needed any more.”

“There’s two ways things get done in Washington, D.C.,” Meadows said. “Slow and never. And so what we have to make sure of is that the slow progress doesn’t become never.”

One is to go big and bold and with that we’re talking about a corporate rate that starts in the teens not in the twenties. The second principle is that we need to bring those foreign earnings back and bring them here to the United States to make sure that they are investing in American jobs and as we do that, I am confident in the ability of the American worker to outwork anybody.

Meadows said he is committed to comprehensive tax reform.

“Now, when I talk about bold, I don’t want to nibble around the edges,” Meadows said. “You know, some are suggesting a corporate rate of 25, 24 percent … The president is at 15 percent. I think that something with a one in front of it, whether it is 15 or 17 or 18, that is the way we need to do it.”

The current corporate tax rate is 35 percent but can vary “depending on the amount of corporate income subject to tax for the year,” according to The Balance.

The Tax Foundation reported in 2016 that “the United States has the third-highest general top marginal corporate income tax rate in the world.”

Meadows said a significant part of tax reform is members of Congress making good on their promises.

“The third thing that I want you to do is this, is keep the pressure on to make sure that members of Congress fulfill their promises,” Meadows said, adding:

You know, it never hurts to do what you said that you would do. It never hurts. But yet we have people who go out and campaign all day long and they campaign one way and then they come up here and they legislate another. The times for hypocrisy are over.

At an event Monday, Treasury Secretary Steve Mnuchin promised that tax reform will happen before the year is out.

>>> Treasury Secretary Says Tax Reform Will Happen Within the Year

“We will have success,” Mnuchin said. “This is a pass/fail exercise and we will pass tax reform, period.”

Congress should have a deadline, Meadows said.

“It is critically important when they start to say, ‘Well, just give me a little more time, a little bit more time,’ you just say, ‘Why don’t you just work a little longer and get it done,’ because we have got a president who is willing and wanting to sign something,” he said.