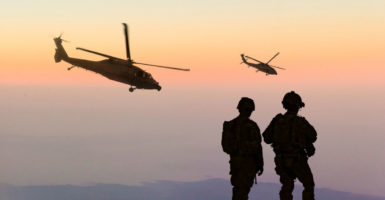 President Donald Trump announced on Wednesday that transgender individuals will not be allowed to serve in the military, citing concerns over financial costs and internal disruptions. (Photo: iStock Photos)

On Wednesday, President Donald Trump announced that he was reversing an Obama-era policy that opened the military to people who identify as transgender.

That policy, announced during the last year of President Barack Obama’s second term, was scheduled to go into effect earlier this month, but Secretary of Defense James Mattis announced a six-month delay in its implementation to review whether it was in fact prudent given the nature of the military and its mission.

The mission of our armed forces is winning wars and protecting the nation. So any personnel policy must prioritize military readiness and mission-critical purposes first.

Trump’s announcement that it would not be feasible to open the military to personnel who identify as transgender returns the military to the policy it had always observed, before the Obama administration’s 12th-hour, politically driven imposition of a transgender agenda.

As I explain in my forthcoming book “When Harry Became Sally: Responding to the Transgender Moment,” the best biology, psychology, and philosophy conclude that sex is a biological reality and that gender is the social expression of that reality.

Unfortunately, 41 percent of people who identify as transgender will attempt suicide at some point in their lives, compared to 4.6 percent of the general population. And people who have had transition surgery are 19 times more likely than average to die by suicide.

People who identify as transgender suffer a host of mental health and social problems—including anxiety, depression, and substance abuse—at higher rates than the general population. Biology isn’t bigotry, and we need a sober and honest assessment of the human costs of getting human nature wrong.

So there were well-justified concerns that Obama was using the military to advance the latest social justice culture warrior agenda item—seeking to mainstream transgender identities and promote controversial therapies for gender dysphoria.

Obama’s policy change ignored the reality that placing individuals who might be at increased risk for suicide or other psychological injury in the most stressful situation imaginable—the battlefield—is reckless.

But even people who disagree about the underlying transgender issues should acknowledge that there are practical concerns for the military when it comes to people who identify as transgender.

Wednesday’s announcement reflects good reasons why transgender accommodations are incompatible with military realities. Here are just a few of the considerations:

1. That the privacy of service members must not be infringed.

This means that no soldiers, including those who identify as transgender, should be allowed to use the sex-specific facility of the opposite sex. When it comes to barracks, bathroom, showers, etc., the privacy of all service members must be respected.

Given the nature of military living quarters, it is unclear where soldiers who identify as transgender could be housed.

2. That all service members remain combat-ready at all times.

But soldiers who have “transitioned” medically require regular hormone treatments and follow-up visits after sex-reassignment surgery. It is unclear how someone who has “transitioned” would be deployable.

3. That all service members be held to the same physical fitness standards, and that these standards by based on the reality of biological sex, not the subjective “gender identity.”

Men who identify as women should not be held to a lower standard than other men—they should be held to the standard for someone with their body that the military has determined is most effective for combat.

4. That scarce taxpayer monies not be expended on costly and controversial sex-reassignment therapies.

This is particularly the case as growing foreign threats are stretching our military’s resources, and as we struggle as a nation to provide basic health care to all. But it is unclear how soldiers who identify as transgender would pay for their treatments apart from including coverage in Tricare, the military health care program.

Unless and until military leaders are able to find a way to respect all of these provisions, there will remain good reasons why the military will be unable to accommodate people who identify as transgender.