Is Sending the Military to the Border a Good Idea? 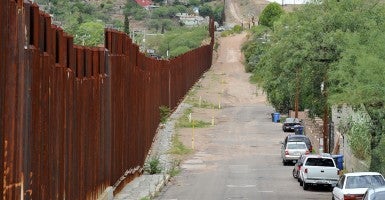 The border fence between the United States and Mexico stretches to the west near Nogales, Arizona. (Photo: UPI/Art Foxall/Newscom)

James Carafano is a 25-year Army veteran, a graduate of and former professor at West Point, and a leading expert on military strategy, including border issues. In his decade at The Heritage Foundation, he has conducted extensive research on border issues, including making frequent trips to the U.S. borders with Canada and Mexico. On the question of whether it makes sense to send the military to the southern border to deal with the current crisis, he is the person to ask.

Question: Have we sent the military to the border before?

Carafano: Sure. Many times over the country’s history troops have been dispatched to help restore stability and sovereignty on the border, particularly on the boundary with Mexico. U.S. military patrols on the southern border continued through 1929.

More recently, in 2006, President Bush sent more than 6,000 troops to the border to assist in the build-up of the Border Patrol. In 2010, President Obama dispatched 1,200 troops to help bolster border security missions. Some National Guard units routinely deploy to the border in support of state and federal authorities as part of annual training duties.

Question: Doesn’t Posse Comitatus prohibit the use of troops on the border?

Carafano: The 1878 Posse Comitatus Act (amended many times) limits the use of the armed forces in conducting law enforcement activities. Federal military forces can do many activities on the border that are not restricted under the act.

If National Guard troops are deployed to border areas either under State Duty or Title 32 status, Posse Comitatus does not apply.

Question: What should troops do on the border?

Carafano: Military manpower is not a cost-effective solution to fulfilling long-term manpower needs for border security. Military manpower does have utility as a stopgap or supplementary measure. In crisis situations, they serve best at freeing up or supplementing Border Patrol and CBP officials to focus on critical tasks by providing additional situational awareness on the border as well as logistical and engineer support.

Carafano: The short answer is no. They key is reducing significantly the numbers trying to cross the border. That has to start with reversing disastrous immigration and foreign policies that have precipitated the current crisis.