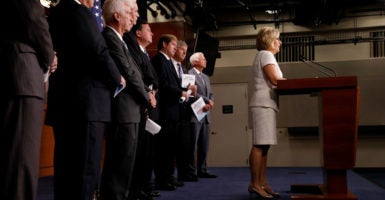 This week, the House Budget Committee released its long-awaited budget. It makes progress in some areas, and falls short in others.

One of the places it falls short is in facilitating tax reform.

By all accounts, tax reform will be difficult. True tax reform that simplifies the tax code while making important reforms to enable greater economic growth must also take on the difficult task of taking away special tax privileges that benefit well-organized special interests.

The proposed budget includes reconciliation instructions that allow Congress to fast-track reform in the Senate, limiting debate and lowering the necessary vote threshold to a simple majority, instead of requiring 60 votes.

First, revenue is not the problem.

Over the next 10 years, the Congressional Budget Office’s projected baseline revenues are set to grow as a percentage of gross domestic product from the current 17.6 to 18.4. At the end of the 10-year budget window, revenues will be a full percentage point above historical averages.

I will say it again—revenue is not the problem. Spending is the problem. The budget proposal instructs the committees to find $203 billion in mandatory savings, but these reforms are only a small piece of the necessary cuts to truly reform our long-term fiscal problems.

Sustainable, long-term tax reform should be deficit-neutral in reconciliation, allowing Congress to adjust both spending and taxes to alleviate the pressure for future tax hikes from rising deficits. Congress must reform the programs that our tax dollars fund.

Second, the revenue-neutral constraint forces Congress to make a false choice between not doing tax reform at all, and tax reform that is tied to new revenue raisers.

The most prominent example of a new and possibly destructive source of additional revenue is the proposed border adjustment tax.

Third, revenue-neutrality may be difficult to accomplish, even if harmful revenue raisers are included.

It is unclear if the current House tax reform blueprint, which includes about a trillion dollars from the border adjustment tax, will be scored as revenue-neutral.

Some dynamic analyses—analyses that take economic feedback into account—have shown the House plan to be revenue-neutral. However, others, whose modeling is probably more consistent with how congressional scorekeepers will likely look at the reforms, show the plan will lose around $3 trillion in revenues over 10 years.

The true economic impact will be more pronounced than the projections of congressional scorekeepers, but unless Congress is willing to take unprecedented actions to use outside revenue analysis—which is not prohibited—they will have to work within the constraints of the scores they are given by their internal referees.

Lastly, the proposed budget continues the tradition of using a current law rather than a current policy baseline.

Using a current policy baseline, which basically assumes the status quo will continue, would have made tax reform easier by assuming a revenue target of about $460 billion less.

Instead, the continued use of the current law baseline follows the letter of the law, which does not take into account the current policy of regularly extending many expiring provisions.

There are competing reasons to use one baseline over the other, but the use of current law as a benchmark certainly makes tax reform more difficult.

The proposed budget does provide about $1 trillion for the repeal of Obamacare taxes. This is an improvement over past budgets that have not included the repeal of these destructive taxes.

However, the repeal of the Obamacare taxes is only a small piece of tax reform. True reform will require additional room to work.

The rules of reconciliation require deficit neutrality outside the 10-year budget window—not revenue neutrality—and there are many options for pro-growth tax reform that include both spending restraint and economically desirable base broadeners that remove current tax preferences and raise additional revenue.

The budget could use a longer budget window to allow for more gradual spending reforms and additional tax savings. It is also not necessary to outline specific spending cuts this year.

Congress could impose an automatic mandatory sequester to limit the growth of government spending and meet reconciliation’s constraints, allowing more time to review spending reforms in a process separate from the tax reform debate.

On the revenue side, there are more than $3 trillion of base broadeners that are not included in the House tax reform blueprint that Congress should consider including in its reform.