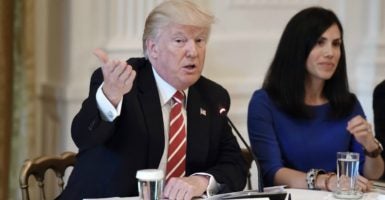 President Donald Trump didn’t give a strong indication about where he stood on details of the Senate bill to replace Obamacare—but he at least seemed happy the proposal is moving forward.

“Obamacare is dead and we’re putting a plan out today that is going to be negotiated,” @POTUS says.

“A little negotiation, but it’s going to be very good,” Trump told reporters during a technology event at the White House Thursday.

During his prepared remarks, he talked briefly about health care.

“Obamacare is dead and we’re putting a plan out today that is going to be negotiated,” Trump said. “We’d love to have some Democrats’ support, but they’re obstructionists.”

After a second try, the House passed a health care bill last month. Though he celebrated the passing in a Rose Garden event, Trump reportedly called the House bill “mean.”

During the press briefing later in the day, White House deputy press secretary Sarah Huckabee Sanders didn’t go into specifics about where the president stood on various elements of the Senate version.

The Senate bill would eliminate the individual and employer mandates, scale back some of Obamacare’s tax credits, and cut off Medicaid funding to Planned Parenthood for one year.

When a reporter asked if the president would support the defunding of Planned Parenthood, Sanders responded, “I’m not sure. I will have to get back to you.”

Sanders opened up the briefing talking about how Trump is happy with the progress.

“This morning, the Senate released the discussion draft of its health care bill,” Sanders said. “The president is pleased the process [is] moving forward swiftly in Congress and he looks forward to seeing a finalized bill on his desk so that we can finally repeal and replace Obamacare before it completely collapses.”

She noted a more recent failure of the 2010 Affordable Care Act, which is the key legislative achievement of President Barack Obama.

“Just yesterday, another insurer announced it was pulling out of Obamacare exchanges,” Sanders said. “Anthem is leaving exchanges in Indiana, the state which the company was actually born and is currently headquartered, and also in Wisconsin.”

Asked if the Senate was rushing the process, Sanders said, “We’ve been talking about reform health care for a number of years. I don’t think it’s moving too fast, nearly eight years [since Obamacare’s passage in 2010].”