Find Out Which Republicans Voted Against House’s Obamacare Replacement Bill 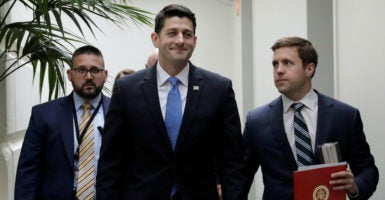 The House of Representatives voted by a razor-thin 217-213 to pass Republicans’ revised Obamacare replacement bill and move it to the Senate, where more changes are expected.

House Speaker Paul Ryan needed 216 votes to pass the legislation, and 20 GOP members voted no Thursday along with all 193 Democrats.

Immediately after the roll call vote concluded around 2:30 p.m., House Republicans began boarding buses to head to a celebratory event at the White House.

The legislation, called the American Health Care Act, has been a point of contention on Capitol Hill since Ryan, R-Wis., pulled the bill March 24 when it became clear Republicans did not have enough votes to pass it.

The House Freedom Caucus, a group of conservative lawmakers, originally opposed the bill but now supports it with the addition of the so-called MacArthur amendment negotiated by Freedom Caucus Chairman Mark Meadows, R-N.C., and Tuesday Group Co-chairman Tom MacArthur, R-N.J.

“The MacArthur amendment will grant states the ability to repeal cost-driving aspects of Obamacare left in place under the original [American Health Care Act],” the Freedom Caucus said in a formal statement. “While the revised version still does not fully repeal Obamacare, we are prepared to support it to keep our promise to the American people to lower health care costs.”

The revisions also include a provision on coverage for Americans with preexisting conditions.

The Wall Street Journal tweeted the names of the 20 Republicans who voted no:

The GOP health law passed despite 20 Republicans voting "no." Here's the list of Republicans who broke ranks: pic.twitter.com/FuPkyzFiy5

“While it’s not full repeal, I’ve said this many times, it’s what we believe is the best piece of legislation we can get out of the House at this moment,” Rep. Jim Jordan, R-Ohio, told reporters Wednesday at Conversations With Conservatives, a monthly gathering on Capitol Hill.

The version of AHCA that passed the House today is better because of the intense involvement of conservatives over the past few weeks.

The bill includes provisions to repeal Obamacare subsidies and replace them with age-based, refundable tax credits to help consumers get coverage in the individual market, and to  repeal the Obamacare mandate that forced consumers to get health insurance or pay a penalty.

The legislation allows states to choose waivers to bypass Obamacare’s community-rating rules, which block insurers from charging sick consumers more than healthy consumers.  States that do so may charge sick customers more only if they don’t maintain continuous coverage.

Before the vote, House Minority Leader Nancy Pelosi, D-Calif., railed on the House floor against the “moral monstrosity” she called Trumpcare. Ryan, when he spoke, depicted the legislation as beginning to keep a promise to voters.

Today I voted to repeal #Obamacare, and in favor of the #AHCA
Here is my statement: https://t.co/ypNAshLJI5

Melanie Israel, a research associate at The Heritage Foundation, praised the bill’s pro-life provisions, one of which ensures that tax dollars will not go to the abortion industry and also defunds Planned Parenthood for one year.

These important restrictions would protect tax dollars from entanglement with the abortion industry and help allow individuals and families to choose health care that meets their needs without violating their beliefs or subsidizing life-ending drugs and procedures.

Hanging out in the #OvalOffice with @POTUS after #AHCA press conference. pic.twitter.com/NHKZfigO8A

Melissa Quinn and Ken McIntyre contributed to this report.