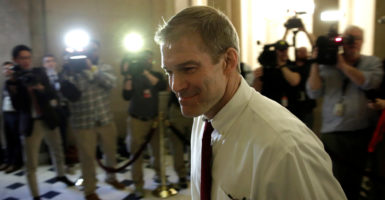 House Republicans are inching closer to a vote on a bill repealing and replacing Obamacare. Conservatives like Rep. Jim Jordan, R-Ohio, backed the revised proposal and have continued to do so as centrist Republicans negotiate additional changes. (Photo: Yuri Gripas/Reuters/Newscom)

House Republicans are inching closer to a vote on the GOP’s revised health care bill following the addition of an amendment that gained the support of two prominent Republicans, and maintained the backing of conservatives.

Reps. Fred Upton, R-Mich., and Billy Long, R-Mo., negotiated the terms of the amendment with President Donald Trump during a meeting at the White House on Wednesday. The new measure would add $8 billion in federal funding over five years to help consumers with pre-existing conditions.

The pair came out in opposition to the bill repealing and replacing Obamacare earlier this week following the addition of an amendment, revealed last week, that would allow states to opt out of Obamacare’s regulations.

The White House has been pushing House GOP leaders to bring the revised bill, called the American Health Care Act, before members for a vote. But top Republicans have struggled to find a delicate balance between appeasing conservatives and centrist Republicans, who opposed the original plan for different reasons.

The amendment from Long and Upton, though, appears to have succeeded in striking that balance, and conservatives said Wednesday they would continue to back the repeal bill barring any changes to its policy.

“While it’s not full repeal, I’ve said this many times, it’s what we believe is the best piece of legislation we can get out of the House at this moment,” Rep. Jim Jordan, R-Ohio, told reporters at a monthly gathering on Capitol Hill.

The text of the amendment hasn’t been released yet, but Rep. Raúl Labrador, R-Idaho, said that he would continue to support the revised plan as long as it only added additional money to help sick consumers.

“If they’re changing any of the policies that we have been able to advocate for and get included in the bill, then that’s going to cause a tremendous problem for conservatives,” Labrador said.

Conservative lawmakers, who negotiated with the White House and Republican leaders for several weeks, announced their support for the health care bill, with the addition of the MacArthur amendment, last week.

The MacArthur Amendment allows states to seek waivers from the federal government to opt out of two of Obamacare’s regulations. One of those regulations, the community rating rules, prohibits insurers from charging sick patients more than they charge healthy patients.

The proposal’s backers said people with pre-existing conditions would be protected from being charged expensive premiums, since the provision requires states to set up high-risk pools, which subsidize coverage for sick people.

But the plan sparked significant skepticism from centrist Republicans who worried the legislation would make it more difficult for Americans with pre-existing conditions to gain affordable coverage.

The future of the House GOP’s health care bill was put into jeopardy—despite the endorsement from the Freedom Caucus—after Upton, former chairman of the Energy and Commerce Committee, came out in opposition to the legislation.

He was joined by Long, who also worried the revised bill wouldn’t protect people with pre-existing conditions.

Still, the addition of the new amendment appeared to quell their concerns.

“I think [the bill] is likely now to pass in the House,” Upton told reporters Wednesday at the White House.

Republicans could vote on the legislation as early as Thursday, but they’ll be voting on the plan without an analysis from the nonpartisan Congressional Budget Office, which estimates how much premiums will change and how many people will lose or gain coverage.

Still, conservatives are hopeful the revised bill, with the addition of the MacArthur amendment, will help lower the price of health insurance premiums for consumers.

“We’re going to have a CBO score with other amendments that are offered in the Senate,” Meadows said, “so before we vote for final passages, we’ll obviously have a CBO score.”