Conservatives to Congress: Deliver on Obamacare Repeal and Replace Promise 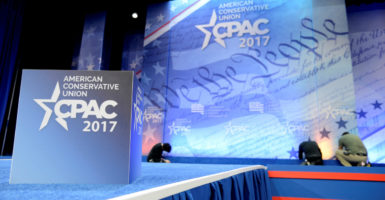 Conservatives and business leaders in the health care market have a message to Congress on Obamacare: Deliver on your promise to repeal the health care law and begin the process of returning to a health sector that can be “America’s greatest.”

During a panel at the Conservative Political Action Conference, or CPAC, on Thursday, Grace-Marie Turner, president of the Galen Institute, told attendees to think of Obamacare’s repeal as a “down payment” that will allow Republicans to implement their own health care reforms in the future.

“We have to do this,” she said. “We have to be get this out of here to be able to deliver on the repeal-and-replace pledge to the American people, and then to begin the process of truly returning to a health sector that can be America’s greatest health sector again.”

While Republicans campaigned since 2010 on repealing Obamacare, efforts to advance the legislation dismantling the law have slowed over the last few weeks.

The GOP-led Congress passed a bill using reconciliation to undo major provisions of the health care law in 2015. But President Barack Obama ultimately vetoed that legislation.

Now, conservatives in Congress are calling on their leaders to bring that same bill before members for another vote.

“It’s going to happen,” Burgess said of Obamacare’s repeal. “What [the 2015 bill] demonstrated to me was that if you got the right president in the White House, you could send that bill back down to the other end of Pennsylvania Avenue, and you could repeal large pieces of the Affordable Care Act.”

The 2015 reconciliation bill repealed Obamacare’s individual and employer mandates, Medicaid expansion, and subsidies. It also stripped the federal government of the authority to run the exchanges, and eliminated federal funding for Planned Parenthood.

Though that legislation passed both chambers of Congress, tensions have emerged among GOP lawmakers over which parts of the health care law to unwind.

Republicans are split over whether to leave the Medicaid expansion in place, while GOP leaders want to include parts of a replacement plan in the same legislation that will repeal the law—a strategy that some conservatives have derided.

But Burgess, who serves on the House Energy and Commerce Committee, said the 2015 reconciliation bill will serve as a “starting point” for Congress this year, with Republicans understanding that the repeal bill will be at least the same as that passed in 2015.

In addition to disagreement over whether to include parts of Obamacare’s replacement in the repeal bill, Republicans also split on whether to provide tax credits or tax deductions to consumers.

But Turner stressed that the process for replacing the law—what she said will become a “once-in-a-generation reform”—will be a lengthy one that requires thought, particularly since Republicans are starting not from a blank slate, but with an already changed health insurance market.

“It’s really what would we want if we were starting from the right kind of policy for the health sector? We are not starting there. We’re starting with Obamacare,” she said. “We’re starting with some number of millions of people … relying on Obamacare. You have to create a lifeboat for them, and structures that provide the kind of resources people need who don’t have means to purchase health insurance on their own so they can continue coverage.”

During his first day in office, Trump signed an executive order addressing Obamacare and giving his federal agencies the discretion to no longer enforce the individual mandate.

And he’s repeatedly said that his new Health and Human Services secretary, Tom Price, will present a replacement plan before Congress.

But so far, no proposal has been presented.

Trump will address a joint session of Congress next week, and Burgess had his own wishes for what he hopes the president will tell Republicans and Democrats in Congress.

“I would like for him to say very directly to us, to my leadership in the House, Republicans and Democrats, that ‘this is your job,’” Burgess said. “‘I want you to get it done.’ Simple as that.”