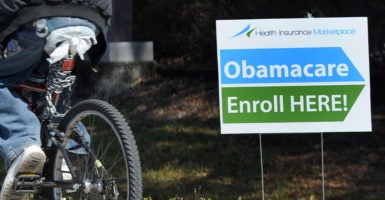 For the last four years, while lavish taxpayer subsidies insulated low-income people from soaring premiums and deductibles, millions of middle-class Americans in the individual Affordable Care Act coverage markets felt both blasts. At the same time, they lost their old plans and found fewer options available. They also found that, despite repeated assurances, they could not “keep their doctors.”

How bad is it?

From 2013 to 2017, premiums more than doubled. This year, average premiums for standard Obamacare plans shot up by a third. Deductibles now average $8,292 for “standard plan” family coverage, and $11,555 for the lowest cost “bronze” plans. For millions, it’s like paying a second mortgage.

Consumer choice is another casualty. In more than half of all U.S. counties, only one plan is available, and 73 percent of all Obamacare plans have narrow provider networks, reducing patient access to doctors and medical specialists.

With coverage so unattractive and unaffordable, fewer people are buying. Only 10.6 million Americans enrolled in the individual exchanges this year, well short of the 24 million projected when Congress enacted Obamacare.

This kind of price control chokes off private markets. Young people by definition are getting less than they pay for, so they opt out of the system. As a result, it turns out to be not a good deal for older Americans either. They’re the only ones left paying into the system, so their premiums rise.

Congress must get back to work, repeal the dysfunctional status quo, and make a serious start on comprehensive health care reform.

The “Health Care Choices Proposal,” developed by a broad range of conservative think tanks, would replace Obamacare’s spending schemes with state block grants to help the poor and the sick to get health coverage. It would restore regulatory responsibility to the states, and it would allow people enrolled in public programs such as Medicaid to redirect public dollars to private health plans of their choice—if they wished to do so.

Can the states do the job? Yes, to judge from recent experience.

States that have received waivers from Obamacare rules are already diverting a portion of the law’s subsidies to create separate risk or health reinsurance pools for older and sicker persons.

The people of the states, through their elected representatives, should have the chance to improve their health insurance markets. The Health Care Choices Proposal would maximize their freedom to protect Americans with pre-existing medical conditions, lower insurance costs, and increase choices for millions of individuals and families. This would be a blessing, particularly for middle-class Americans who face being priced out of the health insurance market.

Washington’s central planning has resulted in exploding insurance costs, reduced choices, and collapsing competition in the state individual markets. Liberals’ ideological obsession with centralized power is rooted in the false faith that Washington’s experts know what is best for the rest of America. The evidence is indisputable: They don’t.

Originally Published in The Washington Times.