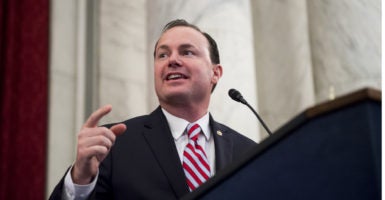 Sen. Mike Lee, R-Utah, says it would be a "horrible idea" for Republicans to include parts of a replacement for Obamacare in the legislation repealing the health care law. (Photo: Bill Clark/CQ Roll Call/Newscom)

A trio of conservatives said they want to see Congress move faster with their efforts to repeal Obamacare and are worried that adding the law’s replacement to the repeal bill could drag down their dismantling of the health care law.

During a breakfast with reporters held Wednesday at The Heritage Foundation, Sen. Mike Lee, R-Utah, strongly spoke out against talks to include parts of Obamacare’s replacement in a bill unwinding the health care law.

“That’s a horrible idea,” Lee said of adding replacement measures to a repeal bill. “We need to repeal it first before deciding what comes next. There’s a lot of agreement among Republicans in Congress with regard to repeal. We were able to get that passed. But there is a lot less agreement on what comes next.”

The Utah Republican finds himself at odds with Republican leaders, who want to simultaneously replace parts of Obamacare law as they undo it.

According to CNN, top Republicans are beginning to work on a new repeal plan called “Reconciliation Plus.”

Lee, though, said including parts of the health care law’s replacement could complicate repeal efforts and possibly even sink the bill.

“That’s going to be a problem, I’m telling you,” the Utah senator said. “That would imperil the repeal effort. Lots and lots of people would have concerns with that.”

The Utah Republican aired his concerns during an hourlong discussion with reporters, where Republican Reps. Jim Jordan of Ohio and Mark Meadows of North Carolina joined him.

Members are expected to vote on the bill dismantling Obamacare in either March or April, according to a timeline House Speaker Paul Ryan mapped out last month.

The bill will likely include a two-year phase out of the Affordable Care Act designed to give consumers time to transition to a new health insurance market.

Lee, Jordan, and Meadows said the spring would serve as the deadline for dismantling the law, but they want to see their colleagues move faster.

“Are we happy at the rate? No,” Jordan, former chairman of the conservative House Freedom Caucus, said.

“It is incredibly important for us to move quickly in order to be able to alleviate some of the fears,” he said.

The comments from the trio of conservatives on Obamacare’s repeal and replacement follow those made by President Donald Trump on Sunday.

In an interview with Fox News, the president said replacement may not come until 2018.

And Lee said Republicans should move on repeal well before next year, even if it means moving forward without a replacement.

“Repeal needs to get done within the next few months so that we can move forward,” he said.

Lee, Jordan, and Meadows have urged Republican leaders to use a 2015 bill repealing Obamacare as, at a minimum, the starting point for the legislation they’ll vote on in the next few weeks.

That bill repealed the individual and employer mandates, Cadillac and medical device taxes, and Medicaid expansion. It also stripped Planned Parenthood of its federal funding.

The legislation passed both chambers in early 2016, but President Barack Obama vetoed it.

The conservative lawmakers want to put that same legislation on Trump’s desk and get rid of Obamacare’s insurance mandates and regulations. But some of their Republican Senate colleagues disagree with which parts of the health care law to get rid of.

Despite their disagreements, GOP lawmakers took the initial steps to repealing Obamacare last month after passing a budget resolution. The document instructed relevant House and Senate committees to begin writing the repeal legislation.

Republicans are using a budget tool called reconciliation to unwind the health care law, but reconciliation can only be used for legislation that changes taxes, spending, or the deficit.

The budget tool fast-tracks legislation in the Senate, and a reconciliation bill can pass the upper chamber with 51 votes, a simple majority.

The GOP has a slim margin in the Senate for the repeal bill to pass—Republicans hold 52 seats in the upper chamber. Three votes against the measure sinks the bill.

Lee said adding replacement measures to the repeal bill makes it difficult for Republicans to accomplish their long-held goal of repealing Obamacare.

“If we load down the repeal discussion with what comes next, it’s going to make it a lot harder to get either one of them done,” the Utah Republican said. “You don’t ever get to what comes next if you don’t first get to repeal. Repeal becomes a lot more difficult if you load it down with all the heavy details involving what comes next when we don’t have a consensus.”