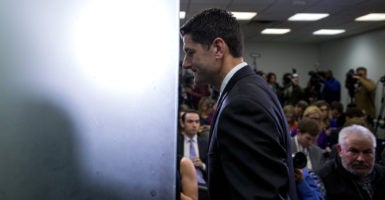 House Speaker Paul Ryan abruptly withdrew the GOP’s bill to repeal and replace Obamacare Friday afternoon after it became clear Republicans didn’t have the votes to pass the plan.

The news came just minutes before the lower chamber was expected to vote on the bill, called the American Health Care Act, and after Ryan, R-Wis., huddled with President Donald Trump at the White House. The bill also faced Republican opposition in the Senate.

Trump and Ryan spent the better part of the past two weeks trying to court conservative lawmakers and centrist Republicans, who had doubts about the proposal and planned to vote against it.

But ultimately, their charm offensive proved to do little to sway the Republican conference.

Now, Republicans will head back to the drawing board as they work to fulfill their yearslong promise to repeal Obamacare.

Although Ryan wouldn’t assign blame, he indicated to reporters that the conservative House Freedom Caucus, which opposed the bill, wouldn’t budge.

Because of that, Ryan said, House leaders “couldn’t quite get consensus” and wouldn’t have been able to secure the 216 votes needed to pass the health care plan:

Ryan said Republicans now will move on to other items on their agenda, like tax reform, and return later to repealing and replacing Obamacare.

But conservatives say they want to start again from scratch.

“The AHCA did not have the support it needed, neither in Congress nor among the American people,” Rep. Jim Jordan, R-Ohio, said in a statement. “Now, House Republicans owe it to our constituents to immediately get back to the drawing board and bring forward a bolder effort to replace the failing Obamacare with a plan to reduce costs by increasing choice and competition.”

Since the day it was introduced, this was presented as a false choice of this bill or nothing, and that strategy was proven very wrong. Congressional leaders should use this opportunity to start over with a bill that truly repeals Obamacare and move forward in a transparent process.

The House initially was scheduled to vote on the bill Thursday—exactly seven years after President Barack Obama signed into law the Affordable Care Act, popularly known as Obamacare.

But Republican leaders postponed the vote Thursday afternoon after they failed—even with repeated efforts by Trump—to rally enough support for the plan.

Ryan quickly scheduled the vote for Friday after White House budget director Mick Mulvaney delivered a message from Trump to Republicans: Vote on the bill now, and if it fails, Obamacare remains.

“He has other things he wants to do,” Mulvaney said of Trump in an interview with CNBC. “‘Impatient’ is not the right word. ‘Busy’ would be the right way to describe this president.”

Ryan and other House GOP leaders unveiled the long-awaited plan to repeal and replace Obamacare two weeks ago.

Though Republicans long had promised to unwind the health care law, which passed without a single Republican vote, the leadership’s bill received little support from conservatives, centrist Republicans, and outside groups.

Members of the conservative House Freedom Caucus took issue with several of the bill’s key provisions, including its phasing out of expanded eligibility for Medicaid and introducing age-based, refundable tax credits.

The House’s right flank gradually whittled its list of demands down to just one: repeal of Obamacare’s insurance regulations, including its mandate of “essential” benefits—provisions they said drove up the price of insurance premiums.

Those essential health benefits are 10 services that insurance plans had to cover without co-payments.

GOP leaders attempted to appease conservatives by altering the bill Thursday to allow states to define which health benefits were required to be included in plans.

But it was not enough to win enough conservatives’ votes and left some centrist Republicans edgy.

>>> Commentary: Why I’m Voting Against the GOP Health Care Bill

While conservative lawmakers weren’t shy in speaking out against the legislation, the hours before Friday’s expected vote also saw more defections by centrist Republicans.

The White House made many attempts to woo conservatives and convince them to vote in favor of the plan.

Just hours before the scheduled vote Friday, Vice President Mike Pence met with conservative members in a last-ditch attempt to sway them.

Republican leaders were left in a tough spot after conservatives and the list of centrist Republicans opposing the bill began to grow.

With 237 House seats held by Republicans, leadership could afford to lose only 22 “no” votes. All Democrats were expected to vote against the bill.