What the Treasury’s New Recommendations Would Mean for Financial Reform 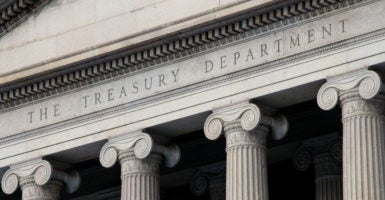 The Treasury Department issued a new report with recommendations for how to reform the financial sector. (Photo: iStock Photos)

This week, in response to President Donald Trump’s February executive order, the U.S. Treasury released the first in a series of reports examining the U.S. financial regulatory system.

The report identifies policies that would improve federal financial regulation in a manner consistent with the Trump administration’s seven core principles.

Treasury incorporated a wide range of perspectives on financial regulatory reform, and they should be commended for producing a large volume of specific reform proposals.

For the most part, the reforms seem perfectly in line with the administration’s core principles. And since those principles closely track the ideas in the Financial CHOICE Act—Texas Rep. Jeb Hensarling’s bill that recently passed the House—Americans should be rejoicing.

Treasury champions the innovative “off-ramp” approach to regulatory relief found in the CHOICE Act. For instance, page 12 states that:

Treasury supports an off-ramp exemption for [Dodd-Frank Act stress tests], [Comprehensive Capital Analysis and Review], and certain other prudential standards for any bank that elects to maintain a sufficiently high level of capital, such as the 10 percent leverage ratio proposed by H.R. 10, the Financial CHOICE Act of 2017.

Page 53 expands on the idea and says:

An alternative approach for providing regulatory relief that should be considered would be to establish a “regulatory off-ramp” from all capital and liquidity requirements, nearly all aspects of the Dodd-Frank’s enhanced prudential standards, and the Volcker Rule for depository institution holding companies and insured depository institutions.

The capital election is an incredibly simple yet powerful idea. If a bank chooses to improve its ability to absorb losses, it earns regulatory relief. There is, after all, little reason to heavily regulate banks that can absorb their own financial risks.

Ultimately, Congress could expand this idea to provide even more regulatory relief and build even stronger markets.

Here are a few highlights from the CFPB section.

Treasury recommends, among other reforms, making the CFPB director removable at-will by the president, funding the CFPB through the regular appropriations process, and repealing the CFPB’s supervisory authority.

The House and the Trump administration are clearly on the same page with these reforms, and the CFPB is clearly in their crosshairs.

The report suggests many other positive reforms that would improve financial regulation in ways consistent with the administration’s core principles.

For instance, Treasury recommends that Congress “reduce regulatory fragmentation, overlap, and duplication,” reforms that are long overdue and that the CFPB (ultimately) phase out the Qualified Mortgage Patch, subjecting all market participants to the same transparent set of mortgage rules.

On balance, the report is very positive and shows clear support for the types of reforms that have passed the House. However, several sections of the report seem to favor keeping Dodd-Frank-type rules in place.

For instance, page 10 of the report states:

The key elements of the regulatory framework that should be retained through any reform include:

•  Actionable living wills for the largest systemically-important banks; and

•  Enhanced prudential standards, based on the size and complexity of financial institutions.

Many of these items align perfectly with the Dodd-Frank approach, not the administration’s core principles. Several other policies in the report might make sense because they provide some relief to smaller institutions, but ultimately they could be harmful.

In the absence of a permanent congressional repeal, or instituting an off-ramp to fully exempt banks, it might make sense to provide temporary relief measures such as these. Ultimately though, it provides little benefit—at great cost—to keep these regulations.

It makes no sense, for example, to force banks to prove they have a plan to stay in business when the economy goes south. They really don’t want to go out of business.

Similarly, policies such as the Volcker Rule provide no particular benefit and ultimately make it more difficult for a bank to diversify its risks. These kinds of rules do not make the system safer.

Even focusing regulatory relief only on smaller banks is problematic. Unless such reforms acknowledge that the principle behind the regulation is flawed, implementing relief in this manner sends a clear message to remain small and undiversified.

While small, narrowly focused banks sound harmless, the U.S. has a disastrous history with those types of banks. Both the Great Depression bank failures and the Savings and Loan crisis consisted of mostly small, undiversified banks. Small banks are not automatically safer.

Regardless, the Treasury’s report is another positive step toward strengthening financial markets, ending bailouts, and protecting taxpayers.

The report includes many specific reforms idea that are consistent with the administration’s seven core principles, particularly empowering Americans to make independent financial decisions and informed choices in the marketplace, save for retirement, and build individual wealth.

Dodd–Frank relies on the federal government to plan, protect, and prop up the financial system, all of which are contrary to the administration’s principles. The approach in Dodd-Frank is counter to the principles that support free enterprise and maximize individual wealth.

The House has done its job to reform financial regulations, and the Trump administration is practically begging for the chance to sign a reform package based on the CHOICE Act.

Many observers think that the CHOICE Act will not go anywhere in the Senate because Democrats won’t support the bill.

The Senate’s 60-vote threshold is a real hurdle, but Senate Republicans can still pass key sections of the CHOICE Act—perhaps even the entire bill—with only the 52-seat majority they currently hold.

They can do so through the budget reconciliation process.

Senate rules require that budget bill provisions be “germane” to budgeting and avoid increasing the deficit. Does the CHOICE Act meet those requirements?

Yes, indeed it does. The nonpartisan Congressional Budget Office (CBO) recently estimated “that enacting the legislation would reduce federal deficits by $24.1 billion over the 2017-2027 period.”

The CBO report is a green light for the Senate. It’s now up to Senate Majority Leader Mitch McConnell and Senate Banking Chairman Mike Crapo to push for reforms that will strengthen financial markets, end bailouts, and protect taxpayers.