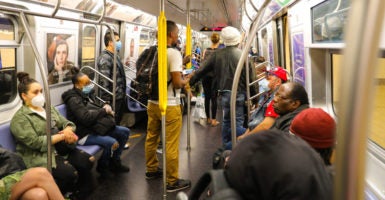 For months, the news media and health experts have repeatedly told Americans that the main way to stop the spread of COVID-19 is to avoid crowded and enclosed spaces.

That guidance led to a nationwide shutdown of churches, schools, businesses, and other places of public gathering, causing the greatest disruption to our way of life in generations.

It seems like a bad time to pack as many people as possible into crowded and enclosed spaces. Yet that’s precisely the goal of the surface transportation bill recently unveiled in the House, which would sharply increase federal spending on mass transit.

The bipartisan Senate version, which was released last year, has plenty of flaws, but those problems are magnified considerably in the House bill.

For starters, the House bill would increase spending on mass transit by 54%, and more than triple the subsidies for Amtrak. That would have been poor policy a year ago, as transit and Amtrak are already heavily subsidized compared with other modes of transportation.

Further, decades-old formulas dictate that mass transit gets a big share of the Highway Trust Fund despite the fact that transit fares do not pay into the fund. As a result, billions of dollars in gas tax revenue flow to mass transit every year, meaning that suburban and rural Americans are providing subsidies to cities.

Ramping up spending on mass transit in 2020 is even more nonsensical, since it’s still unclear when the COVID-19 pandemic will be fully contained.

The House transportation bill would take effect on Oct. 1, increasing transit subsidies just in time for the cold, dry months that are already synonymous with communicable diseases.

That would be rolling the dice with public health, especially considering the warnings from epidemiologists about the potential for a second wave of COVID-19 infections starting in the fall.

It’s even more of a risk when we consider that New York City, the most transit-dependent area of the country, has been the focal point of national infections and deaths.

To put it another way: If COVID-19 was worth shutting down civil society, sending tens of millions of people into unemployment, and adding trillions to the national debt, it should also give pause to legislators eager to pack people together onto buses and subways.

Beyond the public health problems with the House transportation bill, it’s also worth examining the funding numbers.

The Highway Trust Fund, which is the overarching subject of the bill, is already running large deficits. The last reauthorization bill used $75 billion in new debt to cover the balance over five years.

That gap would increase to at least $140 billion over five years for the House bill, unless Congress makes the mistake of ramping up gas and vehicle taxes in the middle of a crippling recession.

The House bill devotes about 25% of proposed spending to transit and Amtrak, which account for only about 1% of miles traveled. This shows how skewed the legislative priorities are.

Further, the bill would spend billions of dollars on climate- and “resilience”-related projects that would add little to the actual effectiveness of our transportation system.

Fortunately, there’s still time for both the House and the Senate to improve their transportation bills. Reforms should include:

Policy changes along these lines would greatly increase the value of infrastructure spending for the overwhelming majority of Americans.

It would also avoid the potential health consequences of using taxpayer dollars to encourage people to crowd onto mass transit.

If state and city governments want to take the risk of increasing their own transit spending in the midst of COVID-19, that would be their choice. Federal lawmakers, however, should recognize that doing so nationwide would be financially and medically irresponsible.