May Jobs Report Leaves the US Begging for Economic Reforms 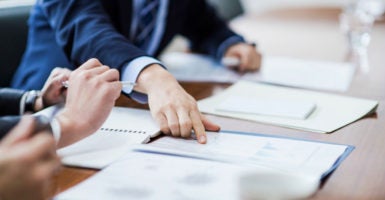 The Bureau of Labor Statistics reported a lower job growth than expected for the month of May, with 138,000 jobs created. (Photo: iStock Photos)

With the month of June now here, the Bureau of Labor Statistics has released its jobs report for the month of May. The picture isn’t too bright.

The report showed tepid economic growth with an increase of 138,000 jobs, down from 174,000 new jobs in April. That number is combined with another drop in the unemployment rate from 4.4 to 4.3 percent—the lowest rate since May of 2001.

Although the number of jobs created is lower than experts predicted, the Trump administration will no doubt take credit for gains in critical sectors of the economy, including mining, which added nearly 50,000 jobs after hitting a low last fall.

Long-term unemployment is down by 187,000 since President Donald Trump took office.

While the U-3 unemployment rate is near record lows in recent history, the alternative measure of the unemployment rate, the U-6 number (measuring total unemployed, plus those marginally attached to the labor force, part-timers, and those who have given up looking for work), has also fallen from 9.7 percent in May of 2016 to 8.4 percent.

On a more troubling note, the labor force participation rate continued to be stagnant, and even showed a slight decline of 0.2 percentage points to 62.7 percent, which is largely responsible for the falling unemployment numbers.

This means that nearly 95 million people are not seeing enough of a motivation to get back in the job market—even though many companies are desperately looking for people to fill empty positions.

One factor for the low labor force participation rate can be linked to slower wage growth. The report found that average hourly earnings rose at an annual rate of 2.5 percent. This rate has gone unchanged since late 2015.

The stagnant nature of the economy in this report shows the continued need for pro-growth solutions.

There’s no question that we should applaud Trump for having the fortitude to stand up to the world and lead by withdrawing from the Paris Agreement. This will, no doubt, create more jobs and be a catalyst to further expand our energy exploration.

But executive action is not enough.

We need fundamental tax reform, the repeal of Obamacare—which continues to make hiring difficult for small businesses—and a serious reform of our welfare system, which rewards able-bodied people for not working and swelled to historic levels under the Obama administration.

If we are going to continue to grow our economy and create jobs that pull people back into the workforce, it is imperative that Congress work with the White House to pass meaningful reforms.

If Congress needs a leader to follow, it need look no further than Thursday’s speech in the White House Rose Garden.