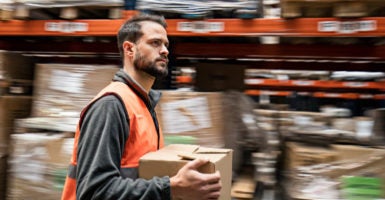 November saw very little change in the U.S. labor market, according to a new employment report from the Bureau of Labor Statistics.

Employers added a net 178,000 new jobs while the unemployment rate dropped. However, unemployment fell in large measure due to a continued drop in labor force participation. The economy largely continued on its current trajectory.

The November household survey reported mixed results. Headline numbers show the unemployment rate fell by 0.3 percentage points down to 4.6 percent—a large and statistically significant drop. However, the employment-to-population ratio (that is, the proportion of the adult population with jobs) remained unchanged.

Unemployment fell primarily because labor force participation continued to decline, dropping to 62.7 percent. Americans who aren’t looking for work do not count as unemployed. So when Americans leave the labor force, this mechanically decreases the unemployment rate—even if hiring does not improve.

Demographic changes, such as the aging and retirement of the baby boomers, can only explain one part of the ongoing exodus from the labor force.

Among younger “prime age” workers (25-54 years old) labor force participation fell more than it did across the entire adult population. It appears that the labor market is weaker than the headline unemployment rate suggests.

Labor force participation rates did not change at all for workers with a high school education or some college. This could reflect a real change in the labor prospects of more educated Americans, though it could also just be statistical noise.

The household survey presented other modestly good news. The long-term unemployment rate dropped, and the average duration of unemployment fell by almost a week. This could be a positive sign.

Measured hourly wages rose considerably between August and October. Part of that increase was probably statistical fluctuations that did not occur in the November report. Over the past year, average hourly earnings have grown 2.5 percent—well above the roughly 1 percent rise in inflation over that period.

The labor market continues to grow at a modest pace. The economy appears to be neither shifting into high gear nor falling into a recession. For the many workers hurt by the Great Recession, there could be worse news. But the recovery they’ve long been waiting for still has yet to come.