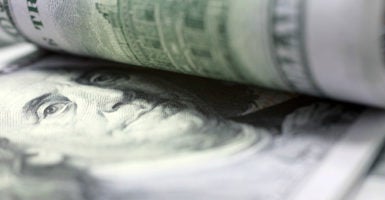 The U.S. national debt is currently 77 percent of gross domestic product, and is projected to reach 150 percent of GDP at the current rate by 2047. (Photo: iStock Photos)

A fiscal storm has been brewing over America for years, and things are only getting worse.

Publicly held debt—the debt the U.S. is borrowing from credit markets (as opposed to debt owed to federal trust funds like Social Security)—is at its highest level as a percentage of gross domestic product since World War II.

To address the problem, Congress and the president must work together to enact a responsible, pro-growth budget that puts spending and taxes on a sustainable path to balance.

Budget cuts in President Donald Trump’s proposal to Congress this week are a key step on that path.

America’s annual deficit—the difference between what the government spends and collects in taxes each year—is projected to rise steeply over the coming decade and to continue growing from there.

The deficit is projected to surpass $1 trillion in nominal terms before the 10-year mark, and then to keep rising.

In terms of the size of the economy, deficits are projected to rise from 2.9 percent of gross domestic product this year to 9.8 percent 30 years from now.

Deficits reached this level at the height of the Great Recession, but current projections assume the deficit will rise to such levels even without another severe economic crisis.

Instead, a combination of demographic changes and health care costs, combined with projected growth in interest on the debt, is driving this fiscal explosion.

>>> Read The Heritage Foundation’s “Blueprint for Balance: A Federal Budget for Fiscal Year 2018”

Absent a course correction, the Congressional Budget Office’s latest projections show the debt will rise from 77 percent of gross domestic product today to a staggering 150 percent of GDP by 2047—almost double the current level. Trump has put economic growth at the top of his presidential agenda, and this goal is directly reflected in the president’s proposed budget.

According to White House sources, “the policies in [Trump’s] Budget would drive down spending and grow the economy. By 2027, when the budget reaches balance, publicly held debt will be reduced to 60 percent of GDP, the lowest level since 2010, when the economic policies of the last administration took effect.”

Congress and the president should work together to realize a fiscally responsible, pro-growth budget agenda.

This includes immediate cuts to unnecessary and improper spending; reforms to bring health care, welfare, and other entitlement spending under control; and tax reform that reduces harmful distortions to saving, investing, and producing in the United States.

It’s not too late for the U.S. to avert a full fiscal nightmare, and Trump’s presidency and a Republican-controlled Congress present a unique opportunity for long-needed reforms.

Time will tell if the administration and Congress do what the moment calls for.

Note: This article was corrected to remove confusion between the U.S. national debt and publicly held debt.