Farm Handouts Are Out of Control. Here Are 5 Reasons to Target Them in the Budget. 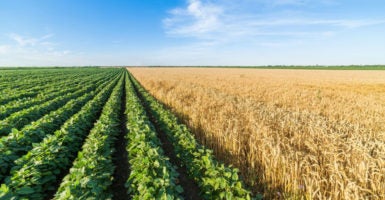 As Congress and the Trump administration develop their budget plans for the fiscal year 2018 budget and beyond, there’s one area that can provide them significant savings: the out-of-control farm handouts.

The current farm handout system, often referred to as the “safety net” for agricultural producers, consists of commodity programs such as two major new programs, the Agricultural Risk Coverage and Price Loss Coverage programs, and the federal crop insurance program.

This safety net costs taxpayers about $15 billion a year.

There are numerous reasons why farm handouts should be addressed in the budget process, but here are just five.

Most people would rightly expect any safety net to only protect farmers from major crop losses. Unfortunately, the safety net goes way beyond this. Under the current system, many agricultural producers don’t have to deal with most ordinary business risks. For example, agricultural producers can enjoy record production and perfect growing conditions and still receive massive government handouts.

If another industry came to Congress and asked the government for programs to protect it from the risks of doing business, it would be mocked.

Yet, the current safety net assumes that multimillion-dollar agribusinesses are less capable of operating their businesses than the smallest mom and pop shops.

The myth behind the agricultural safety net is that it helps small, struggling farmers. In reality, it primarily helps the largest agricultural producers.

Regardless of size, no business should be insulated from market conditions, and this certainly includes these large producers.

The current system, though, taxes non-farm households in order to provide handouts for farm households that generally have far greater incomes and wealth. The discrepancy in income and wealth is particularly stark when looking at the farms that receive most of the subsidies.

Commercial farms—that is, midsize, large, and very large family farms, as well as non-family farms—represent only about 10 percent of all farms in the U.S., but account for 76 percent of the value of production.

In terms of subsidies, commercial farms received 70 percent of government commodity payments in 2015 and 78 percent of federal crop insurance indemnities.

Even though the safety net is often referred to as an “agricultural” safety net, in most instances, it is simply an excuse to provide handouts to a very small number of favored interests.

The commodities that get assistance with ordinary business risk through Agricultural Risk Coverage and Price Loss Coverage can also get assistance from these types of risks through the federal crop insurance program.

Agricultural special interests usually argue that the federal crop insurance program is very successful. If that’s the case, why have so many programs?

There should be at most only one safety net program for a commodity, and it should focus on major crop losses only.

Congress is often criticized for delegating too much power to agencies and then not providing the necessary oversight. But the same delegation and oversight problems happen within Congress itself, and there’s no better example than with the agriculture committees.

These committees, as evidenced by their recent farm bill hearings and complaints about wanting more handouts, are effectively a means to funnel as many taxpayer dollars to agricultural special interests as possible. Who is protecting taxpayers, or for that matter, consumers? As has been seen in agricultural policy for decades, the rest of Congress has failed to provide the necessary oversight and protect taxpayers.

The budget is at least one way that Congress can try to protect taxpayers.

What, then, should a budget include? Here are two things for starters:

Any budget should articulate that central planning and corporate welfare have no business in the farm handout system.

If any handouts are to be provided, they should be based on major crop losses due to natural disasters, not because agricultural producers can’t operate their businesses in the marketplace just like every other business.

2. Eliminate revenue and price-related handouts that ignore these principles.

This would include getting rid of the Agricultural Risk Coverage and Price Loss Coverage programs, the sugar and dairy programs, and revenue policies in the federal crop insurance program—and any other policies that are not directly connected to major crop losses.

The agricultural “safety net” is simply out of control. Congress and the Trump administration now have a unique opportunity to use the budget process as an important tool to move agricultural policy in a commonsense direction. They should seize this opportunity.