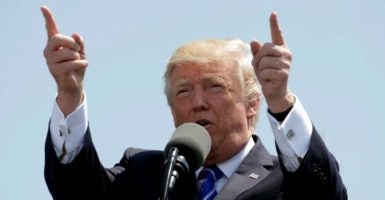 President Donald Trump makes a commencement speech Wednesday at the U.S. Coast Guard Academy. During the speech, he talked about how the media has treated him. (Photo: Kevin Lamarque/Reuters /Newscom)

While Democrats cry for impeachment, legal experts are dubious that President Donald Trump’s reported conversation with FBI Director James Comey about his former national security adviser would be an easy case of obstruction of justice.

“No politician in history, and I say this with great surety, has been treated worse or more unfairly,” @POTUS says.

“I don’t personally think any prosecutor would bring that case,” Ron Hosko, a former assistant FBI director for the bureau’s Criminal Investigative Division, told The Daily Signal, referring to the report that Trump suggested Comey, whom he later ousted, back off investigating Michael Flynn.

“Any defense attorney could argue the president was wishing out loud,” Hosko said. “There was no killing a witness, no destruction of evidence.”

Trump fired Flynn after barely three weeks on the job after concluding the national security adviser misled Vice President Mike Pence regarding the content of his contacts with Russian officials before the president’s Jan. 20 inauguration.

The “big however,” Hosko said, is whether Trump’s May 9 firing of Comey could be connected to an effort to stop an FBI investigation.

“The president can fire an FBI director for any reason or no reason,” said Hosko, now president of the Law Enforcement Legal Defense Fund. “But, if evidence emerges that he fired Comey over the Flynn investigation or over the Russia investigation, now it becomes harder to defend.”

The Justice Department on Wednesday named another former FBI director, Robert Mueller, as a special counsel to investigate Russian interference in the presidential election. The FBI also is investigating Flynn’s contacts with Russia.

Several House Democrats are using Comey’s purported memo on what Trump said to him to demand impeachment of the president—a highly unlikely scenario given Republican majorities in the House and Senate.

Rep. Al Green, D-Texas, delivered a floor speech Wednesday about impeachment, though he didn’t sound convinced the president was guilty. Green noted that it is the Senate’s job to make that determination in a trial after the House adopts articles of impeachment against a president for high crimes and misdemeanors.

“Impeachment does not mean the president will be found guilty,” Green said. “It simply means the House of Representatives will bring charges against the president.”

Democratic leadership in the House and Senate has not taken up the cause of impeachment, although an increasing number of partisan pundits are using the word.

Even if there was a House majority to pass articles of impeachment against Trump, two-thirds of the Senate would have to agree on his removal from office after a trial.

This would be a politically steep hill to climb, one presidential historian notes. Only two presidents, Andrew Johnson and Bill Clinton, have been impeached by the House, and both survived a Senate trial to serve out their terms.

The cases were quite different, but offer context for any such effort against Trump, said Larry Schweikart, a retired history professor at the University of Dayton who is author of “The Politically Incorrect Guide to the Presidents” and co-author of “How Trump Won: The Inside Story of a Revolution.”

“Andrew Johnson, for example, was impeached because he was as unpopular in Washington, as Trump is—but Johnson deliberately and blatantly went out of his way to violate a law so as to provoke impeachment as a test case,” Schweikart told The Daily Signal in an email.

He stressed that Johnson had been Abraham Lincoln’s vice president, assuming office only upon Lincoln’s assassination, and “was a Democrat in a Republican administration that hated him.”

The economy shows signs of improving, Schweikart added, which means that even if Democrats gained a congressional majority, impeachment would be politically difficult.

“The GOP actually opposed Clinton, while his own party supported him rabidly. But a similarity with Trump [is] the economy was booming,” Schweikart said. “Trump’s economy isn’t quite there yet, but it’s very, very hard to even undertake impeachment against a president who has a booming economy. Watergate did not turn [public opinion] against Nixon until the economy turned sour. Had Nixon had Clinton’s economy, he likely would have survived.”

Schweikart said perhaps 20 House Republicans are “committed to the swamp” and might be inclined to join Democrats in impeaching Trump, but he doubts they would take the political risk.

Rep. Justin Amash, R-Mich., in response to a question from a reporter, said that trying to stop an investigation would be an impeachable offense, The Hill reported. But, Amash said, “everybody gets a fair trial.”

The key charge against Johnson was for the controversial firing of War Secretary Edwin Stanton, at the time considered a violation of the Tenure of Office Act. The statute, since invalidated by the Supreme Court, disallowed the firing of high-ranking government officials without Senate approval.

One of the two articles of impeachment against Clinton was obstruction of justice.

Matthew Whitaker, a former U.S. attorney for the Southern District of Iowa, has prosecuted obstruction of justice cases, generally in the context of a drug dealer trying to make a witness change his story. Obstruction has a specific definition in the U.S. Code, Whitaker said.

“Obstruction is a very technical crime with important elements to prove,” Whitaker, now executive director of the Foundation for Accountability and Civic Trust, told The Daily Signal. “We don’t know enough, based on what we’ve seen of the memo.”

In remarks Wednesday to Coast Guard Academy graduates in New London, Connecticut, Trump didn’t directly talk about the obstruction allegation, but he took shots at his political opponents and the media.

“Look at the way I’ve been treated lately, especially by the media. No politician in history, and I say this with great surety, has been treated worse or more unfairly. You can’t let them get you down,” Trump said, getting applause. “You can’t let the critics and the naysayers get in the way of your dreams. … I guess that’s why we won.”

David McIntosh, a lawyer and former House member from Indiana, argued during remarks at a Federalist Society conference Wednesday that Trump had both the authority to talk to Comey about an ongoing investigation and to fire him. McIntosh said:

President Trump acted appropriately if he gave guidance to Director Comey on an investigation. It is important for us to step back and remember that, under the Constitution, the president has the authority and power to enforce the laws. There’s nothing in the Constitution about an FBI director.

The FBI director reports to the president, and it is the president’s decision to delegate authority on investigations. In delegating that authority, presidents have wisely chosen to insulate the FBI from political interference. But the president still has the power and authority to direct the FBI how to do their job.

Congress, in its critiques of the executive branch, should not overstep and try to direct or limit the president’s legitimate exercise of his Article 2 powers.

House Oversight and Government Reform Chairman Jason Chaffetz, R-Utah, requested that the FBI provide a physical copy of Comey’s memo to congressional investigators. Someone apparently read from the Comey memo to The New York Times reporter.

Democrats likely know this is not a viable obstruction case, said Jordan Sekulow, executive director of the American Center for Law and Justice.

Even if the Times story is entirely true, he said, “In the words of James Comey: No prosecutor would bring this case.”

Obstruction of justice is a loaded term. It’s political to create an impeachment scenario. The bar is lower, but we have a Republican Congress. This is just political warfare. It was enough to get the Washington media talking about it. … During the Obama years, when people would talk about impeachment, we’d always discourage that talk as no way to get things done.