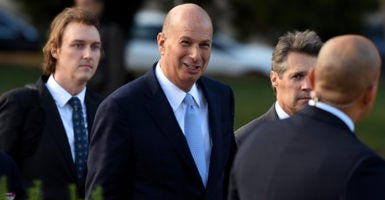 The second week of House Democrats’ impeachment inquiry is moving out of the “heard it from a friend” stage to focus on witnesses who actually listened in on the phone call between President Donald Trump and the president of Ukraine, or who talked directly with Trump about administration policy toward the former Soviet republic.

Here’s a look at the eight individuals scheduled to testify publicly this week before the House Permanent Select Committee on Intelligence.

Jennifer Williams, who is Vice President Mike Pence’s special adviser on Europe and Russia, is slated to testify Tuesday. A foreign service officer from the State Department, Williams was detailed to Pence’s staff.

Williams also was among those who listened in on the July 25 call between Trump and Ukrainian President Volodymyr Zelenskyy.

In that conversation, the two leaders talked about Trump’s interest in Ukraine investigating former Vice President Joe Biden’s son Hunter Biden’s highly paid role on the board of the Ukrainian energy company Burisma.

Williams previously testified behind closed doors to the House intelligence panel, where, according to the transcript, she said that bringing up the Bidens “struck me as unusual and inappropriate.”

Trump called Williams a “Never Trumper” in a tweet Sunday.

“Tell Jennifer Williams, whoever that is, to read BOTH transcripts of the presidential calls, & see the just released statement from Ukraine,” Trump tweeted. “Then she should meet with the other Never Trumpers, who I don’t know & mostly never even heard of, & work out a better presidential attack!”

Also scheduled to testify Tuesday is Alexander Vindman, director of European affairs at the National Security Council. He too listened in on the call.

Ukrainian-born Vindman is an Army lieutenant colonel who received a Purple Heart after he was wounded by a roadside bomb in Iraq. He told House members in closed-door testimony:

However, Vindman said Ukraine did not know at the time that the Trump administration had paused nearly $400 million in U.S. military aid, and that his characterization of Trump’s demand was based on his own interpretation of the call.

He said his concerns about Trump’s phone conversation with Zelenskyy were based on his “making a judgment call as a layman.”

Kurt Volker, special envoy to Ukraine from 2017 until September, was named in an anonymous whistleblower’s complaint about the Trump-Zelenskyy call.

Volker, who worked on some issues regarding Ukraine in conjunction with Trump personal lawyer Rudy Giuliani, is set to testify Tuesday.

During his closed-door testimony before the intelligence panel, Volker said he recalled that Trump “was skeptical” of Zelenskyy, and that the president said of Ukraine’s president, “I hear, you know, he’s got some terrible people around him.”

Timothy Morrison, deputy assistant to the president and the National Security Council’s senior director for Europe and Russia, also is scheduled to testify Tuesday.

Morrison, who was also on the July 25 call, testified to lawmakers behind closed doors that the U.S. military assistance was conditional on a Ukrainian investigation of the Bidens’ activities in their country.

Morrison testified in secret that Gordon Sondland, U.S. ambassador to the European Union, told a Zelenskyy adviser that “what could help them move the aid was if the prosecutor general would go to the mike and announce that he was opening the Burisma investigation.”

As U.S. ambassador to the European Union, Gordon Sondland will be one of House Democrats’ biggest witnesses yet, since he is the closest to the president of anyone else to testify so far.

Sondland was one of three Trump administration officials—the others are Volker and Energy Secretary Rick Perry—entrusted with Ukraine policy, according to the testimony of others who said they were known as the “Three Amigos” and worked with Giuliani.

Sondland, scheduled to testify Wednesday, altered his original secret testimony to lawmakers to say he recalled a conversation indicating Trump wanted something from Ukraine in exchange for the U.S. aid.

William Taylor, acting U.S. ambassador to Ukraine, testified last week that Sondland was involved in pressuring Ukraine to conduct investigations into the 2016 election and the Bidens.

Sondland is a hotel owner whose companies reportedly donated a combined $1 million to Trump’s inauguration.

Laura Cooper, set to appear Wednesday, specializes in Russia, Ukraine, and Eurasian policy as a deputy assistant secretary in the Defense Department.

During closed-door testimony, Cooper told lawmakers that holding U.S. military aid would have weakened Ukraine and was an action that “makes it much more difficult for them to negotiate a peace [with Russia] on terms that are good for Ukraine.”

The Trump administration lifted its hold on the nearly $400 million in congressionally approved military aid without Zelenskyy’s publicly stating, as some claim Trump demanded, that his country was going to investigate Burisma and the Bidens.

Also set to testify Wednesday is David Hale, undersecretary of state for political affairs, who previously served as ambassador to Pakistan and Lebanon during the Obama administration.

Hale testified in secret to lawmakers about misgivings among State Department employees regarding Giuliani’s role in the Trump administration’s recall in May of Ambassador to Ukraine Marie Yovanovitch, who appeared in public Friday before the committee.

“I fully share the concerns in Ambassador Yovanovitch’s statement on Friday expressing her incredulity that the U.S. government chose to move an ambassador based, as best she tell, on unfounded and false claims by people with clearly questionable motives, at an especially challenging time in our bilateral elections with a newly elected Ukrainian president,” Hale told the committee, according to a transcript.

During closed-door testimony to lawmakers, Hill said that Trump’s national security adviser at the time, John Bolton, was skeptical about the Trump administration’s Ukraine policy and opposed the investigations the president requested of Zelenskyy.

Hill quoted Bolton as telling her:  “I am not part of whatever drug deal Sondland and [acting White House chief of staff Mick] Mulvaney are cooking up on this.”

Hill, however, was not on the July 25 call, and told lawmakers she didn’t have firsthand knowledge of U.S. aid being withheld.

She also said meetings between leaders often are discussed and then don’t occur.