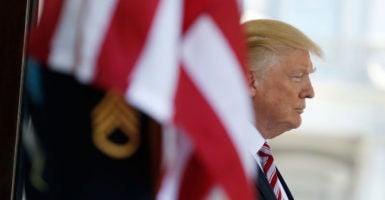 Legal, national security, and intelligence experts agree the president can declassify or disclose whatever information he wants as part of his constitutional powers as commander in chief. (Photo: Joshua Roberts/Reuters /Newscom)

President Donald Trump did not violate the law when he reportedly revealed classified information about an Islamic State terrorist plot during a meeting last week with Russian officials, intelligence and legal experts say.

But the news that Trump shared intelligence with the Russians that was provided to the U.S. by a partner country in the Middle East—a nation that had not given the Americans permission to share the information with Russia—raised questions about the legal issues and protocols that surround disclosures of classified information.

H.R. McMaster, Trump’s national security adviser, would not confirm or deny if Trump shared classified information with the Russian foreign minister and ambassador during a meeting at the White House last week. He downplayed the seriousness of the information Trump disclosed, saying that Trump in the moment made the decision to reveal the intelligence to the Russians.

“What the president discussed with the foreign minister was wholly appropriate to that conversation and is consistent with the routine sharing of information between the president and any leaders with whom he’s engaged,” McMaster said at a White House briefing.

Below, The Daily Signal answers basic questions about how the U.S. obtains intelligence, what the process is for classifying and declassifying it, and what the consequences could be of breaking with protocol.

1.) Did Trump Have Legal Authority to Disclose the Information?

Legal, national security, and intelligence experts agree the president can declassify or disclose whatever information he wants as part of his constitutional powers as commander in chief.

“The president is his own declassifying authority,” said David Shedd, an acting director of the Defense Intelligence Agency under President Barack Obama who also served in the George W. Bush administration’s National Security Council.

“He doesn’t have to ask anybody else whether he can declassify anything,” said Shedd, who is now a visiting fellow at The Heritage Foundation, in an interview with The Daily Signal. “As a declassifying officer in his standing as president of the U.S. and commander in chief, no one else has that authority to divulge the information spontaneously—not to mention with information that wasn’t ours to begin with.”

Patrick Eddington, a policy analyst in homeland security and civil liberties at the Cato Institute and a former CIA analyst, agreed that Trump’s legal authority should not be questioned, although he said it’s fair to assess the president’s judgment.

What makes the whole office of the president different is that the rules just don’t apply. The only relevant questions are, did Trump break trust with a foreign power who supplied this information by not clearing it with them in advance, which would be bad form but not unprecedented. And two, in doing so, did he potentially compromise a genuine, perishable source?

Even if the president has unique authority, other people can be charged with crimes for revealing classified information.

Experts say a government official could be prosecuted under the Espionage Act of 1917, which prohibits the improper accessing, handling, or transmitting of “information respecting the national defense” with the intent of injuring the U.S. or aiding a foreign nation.

“Under the Espionage Act that person can be charged and probably would be unless the president authorized the disclosure,” said Elizabeth Goitein, co-director of the Brennan Center for Justice’s liberty and national security program, in an interview with The Daily Signal.

Government officials who reveal classified information in an unauthorized fashion could also lose their security clearance and job, Goitein said.

2.) What Information Did Trump Disclose, and Was It Appropriate to Do So?

The White House has said Trump did not divulge the source and method of the intelligence he shared with the Russians. The Washington Post reported the information Trump gave to the Russians had to do with an ISIS terrorist threat related to the use of bombs embedded in laptop computers on airplanes.

The U.S. government has already publicly disclosed the laptop threat and acted in response to it.

In March, the U.S. and Britain barred passengers traveling through airports in 10 Muslim-majority countries from carrying laptop computers, tablets, and other devices larger than cellphones aboard direct inbound flights. The Department of Homeland Security is also reportedly considering extending the ban to flights from Europe to the U.S. Shedd said even if the broad contours of the laptop threat are publicly known, the president should be careful in revealing details related to it.

“Don’t confuse acting responsibly with authority,” Shedd said. “[Trump] has a responsibility like any president does to determine whether the information he wishes to release will have negative implications or a fallout. If you have a particular threat that pinpoints not just the fact of a laptop threat or something the [Transportation Security Administration] has already revealed, but add to it by saying [the threat] is out of this airport and this country, and this kind of airline, that starts to reveal the sourcing, or the method, or both. And that has consequences with how partners may share information in the future.”

3.) How Are the Rules for Declassifications and Disclosures Set?

The rules of classification are governed by an executive order—not by congressional statute—that is periodically updated by different presidents. The current version is Executive Order 13526, which Obama signed in 2009. Trump has not modified it yet.

Under the order, “original classification authorities,” such as the leaders of U.S. departments and agencies, can classify and declassify information “owned”—collected or received—by their organizations.

Those authorities can then permit the disclosure of the information to someone who has the proper security clearance and has a status that says they to “need to know” it. Because the president oversees all the agencies, he has full rights to these powers on his own.

Goitein said Obama’s executive order includes a section saying that when the U.S. obtains intelligence from a foreign partner, the American government should honor the restrictions the allied country puts on sharing the information.

“It also says in the executive order that an unauthorized disclosure of a foreign government’s intelligence is presumed to cause harm to [that country’s] national security,” Goitein said.

4.) How Does the US Rely on Other Countries for Intelligence?

“These relationships are some of the crown jewels of the intelligence business,” said Hannah, who was Vice President Dick Cheney’s deputy national security adviser for the Middle East in the first term of the George W. Bush administration.

“We can’t do this alone,” Hannah told The Daily Signal in an interview. “We have huge amounts of capabilities, but particularly in some difficult target sets, there will be players who have unique advantages that are very important to us, particularly in terrorism cases, where it can be very hard to get inside information on the plotting of an operation.”

Hannah called Israel—the reported source of the information that Trump shared with Russia—the U.S.’ most important intelligence partner in the Middle East, with one of the “top five or six most capable” intelligence gathering operations in the world.

Ron Dermer, the Israeli ambassador to the United States, told The New York Times that the two countries would maintain a close counterterrorism relationship despite Trump’s disclosure to Russia.

“Israel has full confidence in our intelligence-sharing relationship with the United States and looks forward to deepening that relationship in the years ahead under President Trump,” Dermer said.

“If in fact an unauthorized compromise occurred, partners will be disappointed and could become more cautious in what they share,” Hannah said. “But at the end of the day, we are leaps and bounds the most capable intelligence service in the world, and the value-added we provide is tremendous. So the thought that this one incident—particularly if sources and methods were not compromised—would lead a country to rupture or fundamentally reassess its intelligence relationship with the U.S., I seriously doubt it. Our partners benefit too much from the reciprocal cooperation.”