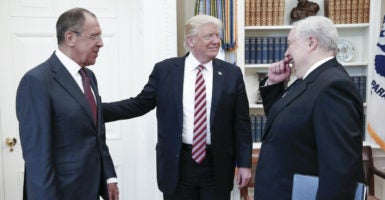 President Donald Trump's May 10 meeting with Russian Foreign Minister Sergei Lavrov, left, and Russian Ambassador Sergei Kislyak in the Oval Office became the springboard for a media furor over the sharing of classified information about the Islamic State. (Photo: Scherbak Alexander/TASS via Zuma Press/Newscom)

“The president in no way undermined sources or methods,” H.R. McMaster says.

When Trump met with the Russians, McMaster said, he was in the room along with deputy national security adviser Dina Powell and Secretary of State Rex Tillerson.

“None of us felt in any way that conversation was inappropriate,” McMaster told reporters in the White House press briefing room.

Trump talked with Russian Foreign Minister Sergei Lavrov and Russian Ambassador Sergey Kislyak about the Islamic State and aviation safety issues in what McMaster said was the “context” of a broader conversation about security and terrorism.

The Washington Post first reported the conversation and concerns about it among some intelligence officials.

McMaster said the “real issue” is the threat to national security by those leaking classified information to The Washington Post and other media outlets.

“It’s incumbent on all of us to bring in the people with the right mandate and the right authorities to take a look at how this leak occurred and how other breaches may have occurred as well,” he said.

White House press secretary Sean Spicer told reporters during an off-camera briefing that there is “clearly a pattern” of agenda-driven leaks within the government.

Trump’s sharing of the information with the Russian officials, Spicer added, was appropriate because it was about “a common threat and one we have a common goal in eradicating.”

Judicial Watch, a conservative watchdog on government, was drafting a request under the Freedom of Information Act to investigate the matter, said Tom Fitton, the group’s president. Fitton said he agrees that the leaking should be a matter for concern.

“The president conveyed information to the Russian ambassador [and foreign minister] that he felt was appropriate,” Fitton told The Daily Signal in a phone interview, adding:

The real question is, who illegally leaked classified information? … Let’s say Russia could have drawn conclusions from this information. What if they didn’t figure it out? They sure will now, thanks to The Washington Post and New York Times.”

Trump made a significant issue during the presidential campaign of the potential compromise of classified information because Hillary Clinton conducted official business as secretary of state over a private email server.

It’s a difficult comparison to make, said Craig Shirley, a presidential historian whose most recent book is “Reagan Rising.”

“Both sides will be dug in with no appreciable loss or gain,” Shirley told The Daily Signal in a phone interview, adding:

National leaders typically keep secrets even from strategic partners or allies, Shirley added. During the storied close alliance between President Ronald Reagan and British Prime Minister Margaret Thatcher, he said, “They still didn’t reveal everything to each other.”

Shirley dismissed the media’s constant comparing of Trump’s actions with the Watergate scandal. But, he said he sees similarities between Trump and former President Richard Nixon in that Trump and his White House lose control of the storyline and spend so much time reacting:

Citizens for Responsibility and Ethics in Washington, a liberal watchdog group, said Trump’s sharing of the classified information with the Russians is part of a larger independent investigation that must occur.

“The president’s action raises serious questions about his relationship with Russia,” spokesman Jordan Libowitz told The Daily Signal in an email. “We know that there is Russia-related business in his tax returns; it’s time that he reveals to the American people just what his business interests with Russia are.”

Ideally, a process would exist for a president to declassify and share information, but such a process isn’t required, said Lee Edwards, a distinguished fellow in conservative thought at The Heritage Foundation.

Edwards said he isn’t sure of a specific parallel, but noted that Reagan, against the advice of his advisers and Cabinet, wrote a letter to Soviet leader Leonid Brezhnev seeking dialogue.

He said House and Senate intelligence committees have legitimate questions to review as to whether Trump’s sharing of information put the intelligence agents of the U.S. or its allies in harm’s way.

“If The Washington Post story is true, it’s possible that President Trump did inadvertently compromise [an] important intelligence source,” Lee told The Daily Signal in a phone interview. “That would make it complicated for whatever the nation, [whether] Israel or Saudi Arabia, that might have provided the information.”