‘You Saved Us’: In an Era of New Threats, Kosovo’s Pro-American Culture Continues 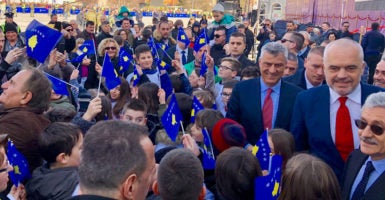 Police have blocked off part of the street for a military parade. Along the barricades, observers wave Kosovar, Albanian, and U.S. flags. One bystander holds a poster on which a smiling Bill Clinton has his fist raised in triumph. The caption reads: “Our brave Kosovo, Never an orphan anymore!”

“We fought for our freedom and our independence, and we would have never won the war on our own—the U.S. is the savior of the people of Kosovo,” Kosovar President Hashim Thaçi tells The Daily Signal during an interview at his offices in Pristina.

The Independence Day festivities testify to the Kosovar people’s pride in their country’s hard-earned independence, as well as their gratitude for the U.S.-led NATO air war in 1999, which reversed a Serbian ethnic cleansing campaign and saved their country from catastrophe.

Freedom, after all, is especially precious for people who know the alternative.

From the front door of Scandé Café in central Pristina, 38-year-old waiter Fadil Azemi observes the Independence Day festivities on Saint Mother Teresa Boulevard. He stands with arms folded across his chest and a smile on his face.

“America’s help in Kosovo was big, big, big,” he says, using an impassioned handshake to make up for what his limited English is unable to express. “Thank you, U.S.A. You saved us.”

He refuses to let this correspondent pay for lunch.

“I’m very proud, actually, to be president of the country with the most pro-American population in the world,” Thaçi says. “We will always remember gratefully all U.S. men and women who have fought for Kosovo.”

With an ethnic Albanian population that is at once predominantly Sunni Muslim and devoutly pro-American, Kosovo is, in many ways, a country where east meets west. At dusk in Pristina, for example, you can hear the muezzin’s call to prayer from the Ottoman-era Imperial Mosque, while from across town the church bells ring from the Roman Catholic Cathedral of Saint Mother Teresa. Yet, judging by the sheer number of U.S., NATO, and EU flags on display for Independence Day, it’s clear that Kosovo is a European, Western nation—and proud of it.

In fact, many children born in Kosovo after the war were given first names in honor of the Western leaders who led NATO’s 1999 military intervention.Those names include “Klinton,” in honor of former U.S. President Bill Clinton; and “Tonibler,” after former British Prime Minister Tony Blair.

In Pristina’s city center, a statue of Clinton stands beside a boulevard named in the former president’s honor. There’s also a “George Bush Boulevard,” and a street named for Blair, too.

Kosovo’s independence movement began in the early 1990s and gained momentum at the end of decade. Yet, by 1999, the Kosovo Liberation Army, or KLA, was on its heels as Slobodan Milosevic’s Serbian army swept across Kosovo, committing mass murder and rape in an ethnic cleansing campaign to expel the country’s ethnic Albanians.

“When I was a student I was among the very first to take up weapons and fight against Serbia at the time when no one thought that an armed resistance against Serbia was even possible,” says Thaçi, who led the Kosovo Liberation Army’s political directorate during the war.

“I was convinced that Serbia would never leave Kosovo through goodwill or peaceful means,” he says. “We started this war to win our rights. It was a matter of our own survival.”

For his part, Thaçi helped convince Kosovo’s insurgent commanders to accept a compromise cease-fire deal, known as the Rambouillet Agreement. The accord’s terms failed to guarantee Kosovo full independence, but kept Kosovo in the West’s good graces. It was a tough sell at the time, but Thaçi’s pragmatism paid off.

Milosevic, then president of Serbia, eventually balked at the deal, spurring NATO to take action to stop the bloodshed that Serbia’s army was inflicting on Kosovo’s ethnic Albanian civilians. The ensuing air war reversed Serbia’s advances and spared Kosovo’s civilians from more suffering.

“We had two alternatives,” Thaçi explains. “To continue our war, but isolated from the international community without any international support. Or, to sign this agreement, entering into a strategic partnership with the United States that would eventually bring forth a bombing campaign against Serbian forces. Not to be ironic, or cynical, but we were fortunate that Milosevic was stupid enough not to sign the agreement.”

“In one way or another, almost every family in Kosovo has been affected by Serbian atrocities,” says the Kosovar president. “For example, my brother in law, the brother of my wife, was killed by Serbian forces. He was a civilian. So, every one of us lives with the consequences of the actions of the Serbian forces in Kosovo.”

The Kosovar president pauses for a beat, then adds: “Without the U.S., I can say we would either be a lost or disappeared nation. We’d be refugees around the world.”

Boots on the Ground

After the war ended in June 1999, a special United Nations mission was established to administer Kosovo. And under the authority of a U.N. Security Council resolution, a NATO peacekeeping operation called Kosovo Force, or KFOR, deployed to the embattled country; it remains there today.

At its height in 1999, KFOR comprised 50,000 troops, including 19,000 Americans. Now, that overall number is down to roughly 4,000 troops from 28 countries, with 685 Americans in KFOR’s ranks. Yet, 20 years later, the ongoing presence of NATO troops in Kosovo remains widely popular.

“Thank you Americans. For your sake we are free today and we are happy to live in peace,” says 24-year-old Arben Krasniqi, who lives in Pristina. “Even after 20 years you still support us. All the people of Kosovo know this.”

As a matter of course, Kosovo’s political leaders prioritize good relations with the U.S. and the EU. To that end, Thaçi proudly pointed to his country’s efforts to combat terrorism and Islamic extremism, as well as to staunch the flow of Middle Eastern refugees through the Balkans to Europe.

For its part, the administration of U.S. President Donald Trump has changed course, opting to more frequently bypass Brussels for the sake of direct engagement with Kosovo; a celebrated move in Pristina.

“Our strategic orientation is very clear. It’s NATO and the EU, and a special relationship with the U.S.,” Thaçi says. “For us it’s very important that for now we have the direct focus of Washington on Kosovo.”

Many in Pristina advocate the permanent presence of NATO troops in Kosovo as a hedge against the Serbian military threat, which still hangs like a sword of Damocles over Kosovo. Serbia would go to war “within 24 hours” if NATO troops left, Thaçi warns.

But Pristina’s appetite for a permanent NATO presence in Kosovo is not just about deterring Serbia; there’s a global context, too. Along that line of thinking, some Kosovars see their country as a front-line bulwark in defense of the American-led, liberal democratic world order.

For one—Russia, Serbia’s traditional ally, has stepped up its efforts to destabilize the Balkans and insert itself as a regional power broker, reflecting a broader gambit to curb Western influence in a region that Moscow considers part of its historical sphere of influence.

“America has a role to defend and to support other countries, different geographies, against dark forces—and Russia is a dark force,” Kosovar Deputy Prime Minister Enver Hoxhaj told The Daily Signal in an interview. “In my view, we still have the same world order, the American world order. And we are your boots on the ground.”

Recently, Russia’s sway over the Balkans has been waning. In 2017, Montenegro became NATO’s newest member, and the Republic of North Macedonia (formerly Macedonia) is now on track to join the Western military alliance, too, after resolving a longstanding name dispute with Greece this year.

Both Montenegro and North Macedonia are former Yugoslavian countries that border Kosovo. And they’ve both faced retaliation from Moscow for their respective NATO membership bids.

Russian agents prosecuted a failed coup attempt in Montenegro in 2016; a plan that involved a plot to assassinate the country’s prime minister, Milo Djukanovic. Moscow, for its part, denies involvement.

And in the run-up to the signing of North Macedonia’s accession protocol with NATO this year, Moscow attempted to stir ethnic conflict in the country. Also, a Russian covert social media propaganda campaign aimed to derail North Macedonia’s landmark name-change referendum, which defused a longstanding diplomatic tiff with Greece that had stood in the way of its NATO ambitions.

“The region is facing a hybrid war, which is sponsored by Russia. And Russia is also using soft power to exercise its influence,” Hoxhaj says. “We think NATO’s continued presence in Kosovo is very important.”

Some fear that Kosovo could be the next Balkan country to draw Moscow’s ire. Russia, on behalf of Serbia, has already opposed Kosovo’s accession to international bodies like Interpol and the United Nations.

“We are not an enemy of Russia, but we are massively pro-European and pro-American,” Thaçi says. “That’s what the people want.”

Russian hybrid warfare is adept at exploiting an adversary’s latent societal schisms to sow instability through means like cyberwarfare and weaponized propaganda. Knowing this, Kosovar officials like Hoxhaj doubt Russia’s hybrid tactics will find much traction in their country because of its resolutely pro-American, pro-European culture.

“Regarding Russian hybrid warfare, we are a target of Russia,” Hoxhaj says. “But because of the domestic context—that we are the most pro-American nation in Europe; that we, in terms of our identity, are Europeans; that we, in terms of culture, language, and religion are not linked with Russia; and because of our clear foreign policy orientation—I think Kosovo is not facing the clear hybrid war as other countries have.”

Thaçi echoed that line of thinking, adding that Kosovo’s pro-Americanism reflects a commitment to emulate the democratic values of the countries that came to Kosovo’s rescue at its darkest hour.

“The citizens of Kosovo don’t experience our relationship with the U.S. as a need, but as a value,” Thaçi says. “Our struggle is closely, intrinsically linked with the values of liberal democracy of the United States. We are building the same democratic institutions and rules. All I can say is that we will never allow the United States to be disappointed with us. The U.S. has won a lifelong, strategic partner in Kosovo.”