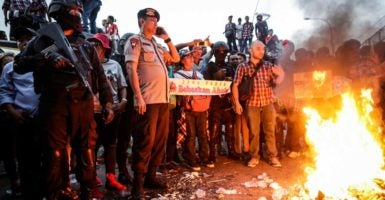 Jakarta’s Chinese Christian governor, Basuki Tjahaja Purnama, more popularly known as Ahok, was found guilty of blasphemy by a panel of five judges in Indonesia and sentenced to two years in prison.

This latest application of blasphemy laws calls into question the commitment to religious freedom in a country often held up as an example of tolerance.

Blasphemy charges against Ahok originally were brought during the contentious re-election cycle when he suggested that Muslims were deceived if they believed that al-Maidah 51, a chapter and verse in the Quran, said that  Muslims could not vote for or be governed by a non-Muslim leader.

As a result of Ahok’s statement in a viral video—which are often doctored or misrepresented—and massive protests it provoked, he received a two-year prison term.

The very existence of blasphemy laws in Indonesia is concerning. As a general matter, such laws are usually applied against minorities and poor people, but the high-profile nature of Ahok’s case has the potential to spark a broader controversy regarding the merit of these laws.

According to a report by Amnesty International, blasphemy laws in Indonesia address two different acts: deviation from the six official religions and defamation of these religions. A presidential decree created the blasphemy laws. Article 1 states:

According to Amnesty International, between 2005 and 2014 at least 106 people were prosecuted and convicted on blasphemy charges. Ahok said he plans to appeal charges against him, but at present, he is being held in Cipinang detention facility.

Many Indonesians are especially concerned that blasphemy laws were applied against Ahok. While his comments regarding interpreting the Quran were controversial among many in the broader Indonesian electorate, Ahok’s term as governor is largely viewed as successful.

Ahok’s focus had been on rooting out corruption in Jakarta and as the former gubernatorial running mate with now-Indonesian President Joko Widodo, he was in a good position to improve the resilience of Indonesian democracy.

The U.S. and the international community should closely monitor the state of democracy and human rights in Indonesia, but especially watch for indicators that religious freedom is deteriorating. The Indonesian courts should reconsider charges against Ahok, this time with the promise of Indonesia’s freedom and democracy in mind.