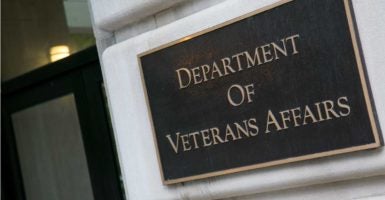 Since January 2014, the D.C. VA had 194 patient safety reports regarding “the unavailability of equipment or supplies.” (Photo: Kris Tripplaar/Sipa USA/Newscom)

When the majority of Americans look at Washington, they see a broken, bureaucratic system that far too often fails to defend their interests.

We all learned again recently that the consequences of that failure can be deadly.

The inspector general for the Department of Veterans Affairs announced April 12 that the VA Medical Center in Washington, D.C., which serves more than 98,000 veterans, was putting many of those veterans at “unnecessary risk”—risk stemming from use of dirty equipment, lack of necessary medical supplies, and the possible use of recalled gear.

What made this announcement especially noteworthy was that it was an “interim summary.” In other words, the inspector general believed the crisis at the D.C. VA was so bad that he couldn’t wait to conclude the investigation before notifying veterans.

Among the inspector general’s findings:

To make things worse, the inspector general also found that more than 27,000 items purchased by the facility—worth more than $150 million—were unaccounted for as of March of this year.

These findings are truly horrifying. But sadly, they are nothing new for the VA.

Dirty equipment, lack of proper procedures, and waste of taxpayer resources have been commonplace across the VA in recent years. But another common thread, which many veterans and their loved ones recognize, is the failure of the VA to hold its leaders accountable.

Brian Hawkins, the medical center’s director, was relieved from his position and placed on “administrative duty” after the inspector general released his report—though it is unknown what this designation entails, or whether Hawkins will have anything to do with patient care in the role.

>>> Fixing the VA for Our Veterans: What Will Trump’s Pick Need to Do?

If history is any guide, Hawkins will also continue to collect a substantial salary while performing his administrative responsibilities, and will likely retire with a handsome federal benefits package.

Recent experience shows this to be the case.

Sharon Helman, the director of the infamous Phoenix VA hospital, was fired in November 2014 following the waitlist scandal that broke nationwide in the spring of 2014.

Upon appeal, an administrative judge upheld her firing not because she oversaw the creation of secret waitlists on which veterans languished and even died, or because she allowed retaliation against whistleblowers seeking to protect veterans, but because she improperly accepted Beyonce concert tickets from a lobbyist.

While federal ethics laws are important, logic suggests being responsible for veterans’ deaths should be more of a terminable offense than whether a government worker was dancing to “Single Ladies.”

Even worse, it took more than two years for three other hospital leaders to be fired for their roles in the scandal.

Associate Director Lance Robinson, Health Administration Service Chief Brad Curry, and hospital chief of staff Dr. Darren Deering were placed on administrative leave and continued to collect their salaries for nearly two years, despite the VA’s having enough evidence to suspend them at minimum.

The Phoenix example is not an isolated one, however. From Tomah, Wisconsin, to Central and South Texas, VA employees of varying levels of seniority have violated the VA’s own rules—in some cases leading to the death of veterans.

While VA Secretary David Shulkin was right to quickly remove Hawkins from his position as director of the D.C. VA, this action is not enough.

Across the federal government, there is a near lack of accountability because it is next to impossible to fire federal workers. This needs to change.

A series of laws, initially created under the Pendleton Civil Service Reform Act in 1883, gave rise to the unaccountable civil service we have today.

While this law was passed to prevent raw political hiring and firing under the so-called “spoils system,” it has evolved to create a permanent, entrenched class of bureaucrats who have job protection for life.

Under Pendleton, only a few, technical government jobs were made permanent in a federal government that was tiny in size and scope compared to today. But changes under the Lloyd-Lafollette Act of 1912 and Civil Service Reform Act of 1978 added layers of protection that have extended dramatically.

Of the nearly 3 million federal employees, more than 90 percent have civil service protections that make firing them for even criminal offenses a nearly impossible process.

The problems at the VA are just the latest, sickening demonstration of the administrative state run amuck. Other agencies and departments have their own problems that stem from this broken system.

>>> Democracy Dies in the Administrative State

The laws originally created to promote merit today merely protect dysfunction and vice. While attempts have been made to bring more competition and accountability to federal employment, these tools are rarely utilized.

What’s needed is a wholesale change to the civil service that moves government workers toward an “at will” system of employment.

President Donald Trump, who famously uses the catchphrase “you’re fired,” is in a perfect position to push Congress to make needed changes to “drain the swamp” of the administrative state.

Several states, such as Georgia, have already successfully used similar reforms to improve their civil service, and it’s time the federal government receives the same treatment.

As this article’s co-author, Jarrett Stepman, wrote in a policy paper for the American Legislative Exchange Council, “By stripping the bureaucratic class of their special protections that few other Americans enjoy through comprehensive civil service reform, Trump can fulfill his inaugural promise, and ensure that when the people speak, Washington has to listen.”

Outrageous and near-criminal treatment of our nation’s veterans should be a wake-up call to the American people that immediate change needs to take place. This process begins by bringing genuine democratic accountability to the “fourth” branch of government.