Democracy Dies in the Administrative State 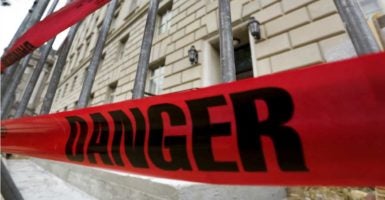 In the age of Trump, the so-called “mainstream media” has once again been possessed of its manic Republican administration energy levels, determined to shine the light on government corruption and malfeasance stemming from the administration.

The Washington Post even adopted the motto “Democracy Dies in Darkness” to show the world its rediscovered commitment to keeping government honest, while attacking The Daily Signal’s legitimacy for its coverage of the White House.

However, what happens when the spotlight turns on the permanent, unaccountable administrative state?

Conservative Review recently ran a series of stories on State Department staffers who had deep ties to the Obama administration. Several had been key architects of the last administration’s nuclear deal with Iran, and one had been openly critical of President Donald Trump on social media.

It would seem reasonable that the American people have a right to know about the activities of federal staffers working in the allegedly nonpartisan civil service.

Instead, Politico ran a story about how federal staffers are “panicked by conservative media attacks,” and insinuated that these reports were orchestrated by an administration that operates completely outside of norms.

Politico reported that the civil servants who were exposed worry the White House may “feel pressure to act from voters in the Republican base.”

Politico followed up with an op-ed labeling reporting on the so-called “fourth branch” of government “McCarthyism.”

Yet, agencies wield vast power over individual Americans, and those who staff them have almost absurd levels of job security that Americans working in the private sector could only dream of.

As I argue in my paper, co-authored with my wife, Inez Stepman, and published through the American Legislative Exchange Council, there is a desperate need for immediate change in civil service laws, which have made it nearly impossible to fire federal employees.

The Pendleton Civil Service Reform Act was passed in 1883 to stop the “spoils system” of politicized hiring and firing of employees. But while passed with good intentions, the law created new problems that are more readily apparent in the 21st century.

The Pendleton Act and a century of similar laws increasing the protections around the civil service fit in nicely with the goals of early 20th-century progressives, like Woodrow Wilson, who dreamed of fundamentally changing American government.

Wilson and the progressives argued for gutting the system of checks and balances envisioned by the Founders and awarding their carefully-distributed powers to an ostensibly apolitical branch with technical expertise.

Since the Pendleton law was enacted, civil service protections have gown—as has the size of government—and now around 90 percent of the nearly 3 million federal employees have protected jobs for life from which they can almost never be fired.

And in the rare situation in which the government has “just cause” to fire a bureaucrat, it can take 300 days, filled with a labyrinth of the sort of arcane hearings usually reserved for lawsuits, to get rid of them—even for blatant misconduct and failure to carry out their duties.

Little wonder why so few ever lose their positions, even for criminal offenses.

The progressive dream of a politically-detached civil service of experts has always been a myth, but the curtain on federal agency neutrality has been pulled back more than ever during and after the 2016 elections.

During that campaign, 95 percent of the political donations from 14 federal agencies went to Hillary Clinton, a Democrat-Republican donation ratio more imbalanced than the more notoriously partisan gap among university faculty.

In recent months, some of these allegedly nonpartisan civil servants have openly attempted to undermine the new administration’s policies, including working with their former political bosses from the Obama White House.

Civil service laws have never and will never be able to ensure a truly apolitical civil service. Political appointees “burrow” into the next administration, securing permanent civil service jobs where they are free to continue conducting their policy preferences.

Instead of incentivizing efficiency and expertise, civil service protections have entrenched a class of bureaucrats with their own policy interests in Washington, and insulated them from the corrective force of democratic accountability.

Today, American confidence in government is dangerously low. Though the voting franchise has been extended enormously in the past 100 years, the changes American voters can actually effect in Washington grow ever more circumscribed by out-of-control agency power, and restoring democratic accountability to the agencies is lambasted by mainstream media outlets as unacceptable “McCarthyism.”

For constitutional government to be restored and true democracy to thrive, the administrative state must be curtailed. That can’t begin to happen until the fourth branch is changed from within.

Andrew Jackson, whom Trump has spoken of favorably, warned of a system in which office is “considered as a species of property, and government rather as a means of promoting individual interests than as an instrument created solely for the service of the people.”

The political preferences of modern-day voters are increasingly opposed by a “swamp” class of almost 3 million nearly unfireable bureaucrats: overpaid, underworked, and wielding far, far too much power over the lives of their fellow Americans.

If Trump wants to be able to say “you’re fired” to those opposing him within the executive branch, he would do well to use his bully pulpit to urge Congress to unwind some of these century-old job protections.