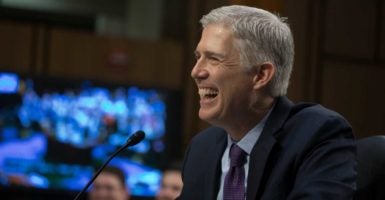 Judge Neil Gorsuch will succeed the late Antonin Scalia on the Supreme Court after his confirmation by a 54-45 vote. (Photo: Jeff Malet Photography/Newscom)

The Senate voted 54-45 on Friday to confirm Judge Neil M. Gorsuch as the 113th person to serve on the Supreme Court.

Gorsuch, a federal appeals court judge who was nominated Jan. 31 by President Donald Trump, will be sworn into office in two ceremonies Monday, the White House said.

“As a deep believer in the rule of law, Judge Gorsuch will serve the American people with distinction as he continues to faithfully and vigorously defend our Constitution,” Trump said in a formal statement released by the White House.

Gorsuch, 49, a favorite of conservative legal scholars, will take the seat of Justice Antonin Scalia, a conservative icon who died unexpectedly on Feb. 13, 2016.

All three did so. The missing 100th vote was that of Sen. Johnny Isakson, R-Ga., a supporter of Gorsuch’s, who followed his doctor’s advice not to stay in Washington beyond Thursday.

Congratulations to an exceptionally qualified and respected judge on his confirmation to the Supreme Court! #SCOTUS https://t.co/itTom467MT

McConnell, R-Ky., and other Republicans argued that the voters should decide, through the 2016 presidential election, who would join the eight other Supreme Court justices.

Gorsuch’s confirmation preserves the high court’s 5-4 conservative leaning, although Justice Anthony Kennedy, for whom Gorsuch worked as a law clerk, often casts a deciding vote toward the left or the right.

It is a great honor to announce the historic confirmation of Judge Neil M. Gorsuch as associate justice to the Supreme Court of the United States. Judge Gorsuch’s confirmation process was one of the most transparent and accessible in history, and his judicial temperament, exceptional intellect, unparalleled integrity, and record of independence makes him the perfect choice to serve on the nation’s highest court. As a deep believer in the rule of law, Judge Gorsuch will serve the American people with distinction as he continues to faithfully and vigorously defend our Constitution.

I would also like to thank Justice Scalia and his wife Maureen for their immeasurable service to this country. Justice Scalia’s legacy of fidelity to our laws and our Constitution will never be forgotten.

In 2006, the Senate unanimously confirmed Gorsuch to his current seat on the Denver-based U.S. Court of Appeals for the 10th Circuit. He will serve on the Supreme Court for life, unless he retires or is impeached.

Gorsuch, a Denver native, is married to Louise Gorsuch. They have two children.

Gorsuch graduated from Columbia University with a bachelor of arts degree and got his law degree from Harvard Law School. He has a doctorate from Oxford University.

He is the author of “The Future of Assisted Suicide and Euthanasia,” a book arguing against legalizing physician-assisted suicide, an issue that came up repeatedly in his confirmation hearings before the Senate Judiciary Committee.

Gorsuch worked at the Department of Justice under President George W. Bush as principal deputy to the associate attorney general, Robert McCallum Jr., in 2005-2006.

Before that, he was part of the Washington-based law firm Kellogg, Huber, Hansen, Todd, Evans & Figel from 1995 to 2005.

One of Gorsuch’s noted opinions occurred when the judge sided against Obamacare’s contraceptive mandate. That measure required religious nonprofits as well as the owners of faith-based companies to cover contraceptives, abortion-inducing drugs, and sterilization as part of employee health insurance plans even if doing so violated their deeply held beliefs.

Ken McIntyre contributed to this report, which has been updated.