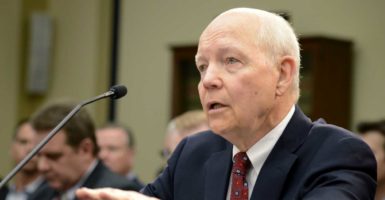 In the heart of tax season, Internal Revenue Service Commissioner John Koskinen will address the National Press Club next Wednesday even as many members of Congress question why someone who dodged impeachment during the Obama administration continues to be the face of the tax collecting agency under President Donald Trump.

“If we saw more pressure from Congress, I think Koskinen would be gone,” @JordanSekulow says.

“It could be partly that for the checklist of the Trump administration, they don’t yet have a full Cabinet and this isn’t a priority. External pressure, from what I picked up, should continue,” Jordan Sekulow, executive director for the American Center for Law and Justice, a conservative legal group, told The Daily Signal. “If we saw more pressure from Congress, I think Koskinen would be gone.”

Koskinen’s five-year term ends in November, unless he is removed. Though Koskinen wasn’t in office when the IRS targeted tea party and conservative groups, House Republicans said he was repeatedly uncooperative and misled congressional investigators. Koskinen has said he acted in good faith to cooperate with the investigation.

Earlier this month, the IRS informed the U.S. District Court for the District of Columbia it located “an additional 6,924 documents of potentially responsive records” relating to a Freedom of Information Act lawsuit by Judicial Watch, a conservative watchdog group.

[Y]ears after IRS Commissioner Koskinen claimed all the Lois Lerner backup emails during the relevant time period were erased, we now learn that there are almost 7,000 undisclosed documents potentially related to the IRS targeting … We call on IRS Commissioner John Koskinen, a Democratic Party major donor, to finally be held accountable for his role in covering up the targeting of conservatives for their political views. Commissioner Koskinen and the IRS may have been protected by the Obama White House, but now under President Trump we are confident the time for holding them accountable is finally here.

Sekulow said Koskinen missed the opportunity to change the agency, and instead sided with the entrenched bureaucracy.

The Judicial Watch lawsuit filed in 2015 sought records about IRS selection of individuals and organizations for audits based on applications for nonprofit tax-exempt status. The IRS won’t specify a timeframe for producing the documents, according to Judicial Watch.

In a May letter to the House Judiciary Committee, Koskinen said there was no deliberate effort to withhold information from Congress. He said there is “understandable frustration with the document production and retention challenges of our agency during the past several years.”

Koskinen stressed he was not working for the agency when the alleged targeting occurred and, “Under my direction, the IRS has responded comprehensively and in good faith to the various subpoenas and document requests from the investigating entities.”

Pursuant to 26 U.S.C. § 7803, you have the authority to remove Commissioner Koskinen. We encourage you to dismiss him in the most expedient manner practicable. Such an action would restore the credibility of our Federal tax authority and the faith the American people have in their Constitutional rights to free speech and association.

Chaffetz’s opinion hasn’t changed that Koskinen should not only be removed from office, but should forfeit his government pension, M.J. Henshaw, spokeswoman for the House Oversight and Government Reform Committee, told The Daily Signal Thursday.

Last week, Cause of Action Institute, a conservative government watchdog group, issued a report asserting the IRS can engage in politicized targeting again under a section of the internal revenue manual. The report called for the Trump administration to roll back the rule.

“Targeting was—and is—IRS policy, not a violation of it,” says the reported titled “Sensitive Case Reports: A Hidden Cause of the IRS Targeting Scandal.”

“We had hoped Mr. Koskinen would address the problems our report highlights and would urge his successor, if any, to do so,” Cause of Action Institute President John Vecchione told The Daily Signal in a statement.

The provision that allows this is Section 7.29.3 of the Internal Revenue Manual, “that singles out applications from any group interested in issues that might garner attention from either the media or Congress. In such cases, the merits of the application are ignored as IRS employees develop ‘Sensitive Case Reports’ for consideration by those above them in the IRS hierarchy,” the report says.

Seven years after the targeting scandal began, the rule that enabled this inexcusable behavior still exists. Until that rule is removed from the internal manual used by all IRS employees, targeting of political opponents will remain a very real threat. Fortunately, removing the offending provisions is a simple process that can be started at any time and completed without the need for new legislation or formal notice-and-comment rulemaking.

The IRS also did not respond to The Daily Signal’s question about the Cause of Action report. However, in a statement to Fox News, the agency said: “The IRS strongly disputes the report and any suggestion or allegation that Exempt Organizations is targeting taxpayers … The IRS emphasizes that this point has been confirmed by independent third parties, including the Treasury Inspector General for Tax Administration.”