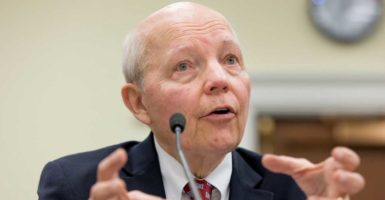 The decision to refer the matter to the Judiciary Committee means Koskinen can continue to serve under President-elect Donald Trump in January, unless he’s fired or asked to resign. Koskinen’s five-year term ends on Nov. 12, 2017.

Koskinen “would have been the first appointed executive-branch official to meet that fate in 140 years,” had the resolution succeeded, according to Politico.

Conservative lawmakers on Capitol Hill have been pushing for Koskinen’s impeachment for months, even though GOP leaders sought to avoid the showdown.

Rep. Jim Jordan, R-Ohio remained adamant that Koskinen must be held accountable. “We think Mr. Koskinen has to go,” Jordan told The Daily Signal in an interview before the vote.

Jordan, who has repeatedly called for Koskinen’s impeachment, said the targeting of conservative groups by the IRS is unacceptable. He said Koskinen’s role in the scandal warrants impeachment proceedings.

“Koskinen [was] brought in to clean up the mess, and he has done, in my judgement, just the opposite,” said Jordan, who previously led the House Freedom Caucus.

In the interview, Jordan outlined the corruption he said has occurred on Koskinen’s watch, including “allowing backup tapes to be destroyed that were under subpoena to be given to Congress, not telling [Congress] about Lois Lerner’s missing emails, making statements to Congress that turn out later to be not true.”

Jordan also highlighted a story from a tea party organization in Albuquerque, New Mexico, which has been waiting seven years for the IRS to approve its tax-exempt status.

All of this activity, according to Jordan, is sufficient grounds for Congress to impeach Koskinen.

“When all that happens, and you’re the head of this agency, we think you’ve got to go. So we plan to make a motion [Tuesday] afternoon on the House floor that says that we should bring up impeachment proceedings and an impeachment vote against Mr. Koskinen,” Jordan said.

By filing a motion Tuesday, the conservative lawmakers attempted to force the House to vote before Congress adjourns for the year. The measure failed on a vote of 342-72 when GOP leadership joined with Democrats to refer it to the Judiciary Committee, which isn’t expected to take action. (See how your member voted below.)

Rep. Mark Meadows, R-N.C., urged passage of the resolution so the next Congress would “take it up and judge it on the merits of the argument.”

Meadows, who recently became chairman of the conservative House Freedom Caucus, said this call for impeachment is all about holding government officials accountable for their actions.

Following the vote, Republican Study Committee Chairman Bill Flores, R-Texas, reiterated his support for Koskinen’s impeachment: “IRS Commissioner Koskinen has willfully misled Congress, refused to comply with House subpoenas, and violated the trust of the American people. Commissioner Koskinen should be impeached and removed from office.”

This article has been updated with news about the House vote.