Trump Signals Change in Tone for Police From Obama 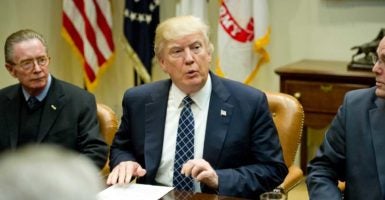 President Donald Trump meets with members of the Fraternal Order of Police Tuesday in the Roosevelt Room of the White House. (Photo: Ron Sachs/CNP/Newscom)

President Donald Trump told the nation’s largest police union his administration will “always have your back,” a departure from what many police organizations say they felt about the previous administration.

“Sadly, our police are often prevented from doing their jobs,” @POTUS says.

The Fraternal Order of Police visited the White House Tuesday. Many police organizations criticized the Obama administration for being quick to criticize the officers after a police shooting before knowing all the facts.

Trump met with nine police union officials from across the country, and was joined by Vice President Mike Pence and Attorney General Jeff Sessions, where he asserted “there is nobody braver” than law enforcement, and thanked them for their endorsement in last year’s election.

“I made a crucial pledge,” Trump told the police officials. “We will always support the incredible men and women of law enforcement. I will always have your back 100 percent.”

Such words from a president mean a lot, noted Scott Erickson, president of Americans in Support of Law Enforcement.

Erickson wasn’t part of the meeting, but asserted this first formal meeting with Trump and the Fraternal Order of Police marks a change in tone.

“Public perception of police is slowly improving for two reasons,” Erickson, who was a police officer in San Jose, California, for 18 years, told The Daily Signal. “People got burnt out on the negativity, hearing the worst about cops. Two years ago, it hit a new low. Last year, approval for cops spiked. But what top government officials were saying filtered down to public discourse about cops. That is changing.”

During his presidency, Barack Obama verbally criticized several police departments, asserting in July 2009 that the Cambridge Police Department “acted stupidly,” when an officer stopped a Harvard professor outside his home. In December 2012, after winning re-election, Obama said some local police departments “are not trying to root out bias.”

In July 2016, after shootings in Minnesota and Louisiana, Obama said while in Warsaw, Poland, “These are not isolated incidents, they are symptomatic of a broader set of racial disparities that exist in our criminal justice system.”

That same month, during a memorial service for five slain police officers in Dallas, Obama talked about racial disparities in law enforcement, saying, “When all this takes place more than 50 years after the passage of the Civil Rights Act, we can’t just simply turn away and dismiss those in peaceful protest as troublemakers or paranoid.”

These were the types of comments that framed the description of police officers, Erickson said. That seems to have changed with a new president, according to Erickson.

“Police no longer feel they are going to have an administration casting a skeptical eye on them before all of the facts are in,” Erickson said.

On Feb. 9, Trump signed three executive orders to back law enforcement. The first stated the federal government is on the side of federal, state, tribal, and local law enforcement. The second established a task force for reducing crime, and the third created a separate task force to determine the best way to take on transnational criminal organizations and drug cartels.

During his meeting with police Tuesday, Trump said that police must be empowered to keep the public safe.

“Sadly, our police are often prevented from doing their jobs,” Trump said. “In too many of our communities, violent crime is on the rise. These are painful realities that many in Washington don’t want to talk about. We have seen it all over.”

Trump noted, “I always ask, ‘What’s going on in Chicago?’”

Dean Angelo, president of Chicago Fraternal Order of Police, was among those who met with the president. After the meeting, the Chicago Tribune reported Angelo said, “I just mentioned that the police officers want to work, and that [they] need people to support police officers to go back to work so they can work toward stemming the violence in our city.”

Trump referenced during the meeting that Sessions on Monday talked about withholding Justice Department grants from cities that don’t cooperate with federal law enforcement on immigration, commonly known as sanctuary cities.

Fraternal Order of Police National President Chuck Canterbury said the organization backed the president on cracking down on sanctuary cities.

“We believe in enforcing the laws of the country of the United States,” Canterbury told reporters after the meeting, according to the Tribune. “We believe that sanctuary city status is not a good thing for America. We support the president on his sanctuary city initiative.”