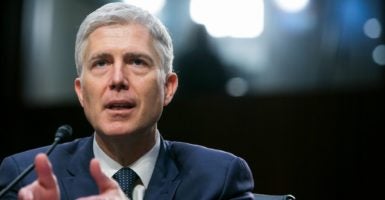 The Senate is scheduled to vote on Neil Gorsuch's confirmation to the Supreme Court on April 5. (Photo: Kris Tripplaar/Sipa USA/Newscom)

Everyone knows that Supreme Court confirmation hearings can be a dramatic, even emotional, events.

The stakes are high. As a senator, there are few responsibilities more important than deciding whether to vote for a nominee to the Supreme Court.

Unfortunately, these days, it seems like being nominated to the Supreme Court is a lot like running for office. As we’ve seen over the past few weeks, there are a lot of interest groups on both sides that have mobilized for this confirmation process.

Judge Neil Gorsuch, however, is not a politician. The acrimony, duplicity, and ruthlessness of today’s politics are still foreign and unfamiliar to him. May that continue to be true.

In a former life, I had the good fortune of appearing before Gorsuch as a practicing attorney, so I know from personal experience that he is one of the very best judges in the country.

He comes to oral argument prepared and asks probing, fair questions that help everyone better understand the arguments.

Gorsuch does not promote an agenda or grandstand. He writes thoughtful and rigorous opinions that are not only careful and well-reasoned, but also easy—even pleasant—to read.

Gorsuch has the résumé of a Supreme Court justice. Yet what’s most impressive about his legal career and his approach to the law is his fierce independence from partisan and personal influence.

The judiciary is set apart from the other branches of our republic because we allow it to invalidate actions of the elected branches.

Our confidence in the American judiciary depends entirely on judges like Gorsuch—judges who are independent and whose only agenda is getting the law right.

Senate Democrats tried to tear Gorsuch down last week. But it did not work.

They tried to argue that Gorsuch was outside the mainstream. But this is not what Democrats said the last time Gorsuch appeared before this committee.

In fact, Gorsuch’s nomination to the 10th U.S. Circuit Court of Appeals was so uncontroversial that Sen. Lindsey Graham was the only member of the Judiciary Committee who bothered to show up at his confirmation hearing, and he was confirmed unanimously on a voice vote.

Senate Democrats questioned Gorsuch’s independence because, in their view, he hadn’t sufficiently criticized the president’s comments about judges. But Gorsuch has made his views on this subject abundantly clear.

Democrats complained that Gorsuch did not provide enough hints about how he would rule on certain issues. But that’s a reason for confirmation, not against it.

In our system, judges don’t provide advisory opinions, they decide cases and controversies only after each side has an opportunity to make its case before the bench. And they do so outside of political influence.

Senate Democrats also attacked some of Gorsuch’s past rulings. They said he was hostile to particular types of claims or to particular plaintiffs.

But you can’t evaluate someone’s judicial record by looking at who wins or loses in his courtroom. In our system, you face the same burden of convincing the court regardless of who you are, and judges don’t decide cases based on their own personal preferences.

And the record shows that Gorsuch has applied the law neutrally in all cases, without regard to the parties.

Gorsuch’s reputation won’t be affected by how Democrats attacked him this week. The same, however, can’t be said of the Senate. The night Gorsuch was nominated, he said the U.S. Senate is the greatest deliberative body in the world.

But these days, it seems like this title is more of a challenge than an observation. Hopefully Gorsuch will be proved right when his nomination moves to the Senate floor in two weeks.