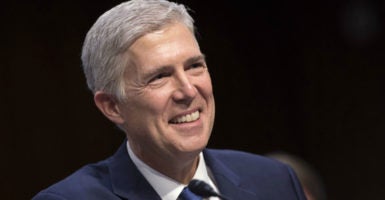 If he is conformed to the Supreme Court, Judge Neil Gorsuch says Mach 20 before the Senate Judiciary Committee, he will use the law as his standard to judge impartially. (Photo: Kevin Dietsch/UPI/Newscom)

“My decisions have never reflected a judgment about the people before me—only my best judgment about the law and facts at issue in each particular case,” Gorsuch said in his prepared statement Monday before the Senate Judiciary Committee. “For the truth is, a judge who likes every outcome he reaches is probably a pretty bad judge, stretching for the policy results he prefers rather than those the law compels.”

President Donald Trump nominated Gorsuch, 49, in January to fill the seat of Justice Antonin Scalia, who died just over 13 months ago. In 2006, the Senate confirmed him by voice vote as a judge on the 10th U.S. Circuit Court of Appeals.

Gorsuch appeared to listen intently to the concerns of Democrat and Republican senators alike, even when under attack, smiling during more light-hearted moments. He is scheduled to answer questions beginning Tuesday in hearings expected to last through Thursday.

Those who introduced Gorsuch echoed his commitment to adhering to the rule of law.

“I have no doubt … that Judge Gorsuch has profound respect for an independent judiciary and the vital role it plays as a check on the executive and legislative branches,” said Sen. Michael Bennet, a Democrat, in introducing his fellow Coloradoan. “I may not always agree with his rulings, but I believe Judge Gorsuch is unquestionably committed to the rule of law.”

Neal Katyal, who also introduced Gorsuch, is a professor of national security law at Georgetown University and former acting solicitor general under President Barack Obama from 2010-2011.

Katyal called Gorsuch a “first-rate” judge who is committed to upholding the rule of law.

“I have seen Judge Gorsuch in action and I have seen him hearing cases and have studied his written opinions,” Katyal said. “This is a first-rate intellect and a fair and decent man. … The judge’s work reflects his dedication to the rule of law.”

Katyal previously had spoken out in support of Gorsuch.

In an op-ed published in The New York Times in January headlined “Why Liberals Should Back Neil Gorsuch,” Katyal wrote that he was confident of Gorsuch’s ability to serve as an unbiased judge:

I was an acting solicitor general for President Barack Obama; Judge Gorsuch has strong conservative bona fides and was appointed to the 10th Circuit by President George W. Bush. But I have seen him up close and in action, both in court and on the Federal Appellate Rules Committee (where both of us serve); he brings a sense of fairness and decency to the job, and a temperament that suits the nation’s highest court.

Sen. Cory Gardner, R-Colo., who also introduced Gorsuch, called the nominee for the high court a mainstream judge who adheres to the dictates of the law.

“When you look at his record, his writing, his statements, it’s easy to see why Judge Gorsuch has such overwhelming appeal,” Gardner said. “Judge Gorsuch is not an ideologue,” adding:

He is a mainstream jurist who follows the law as written and doesn’t try to supplant it with his own personal policy preferences. As he said, personal policies or policy preferences have  no useful role in judging. Regular and healthy doses of self skepticism, and humility about one’s own abilities and conclusions always do. Judge Gorsuch is not an activist judge but rather a faithful adherent to and ardent defender of our Constitution.

“The judge’s job, our nominee says, is to deliver on the promise that ‘all litigants, rich or poor, mighty or meek, will receive equal protection under the law and due process for their grievances’” Grassley said in a prepared statement.

Senate Democrats voiced their disappointment in opening statements about how Republicans chose not to hold a hearing or vote for Merrick Garland, Obama’s nominee last year to the Supreme Court following Scalia’s Feb. 13 death.

“The Judiciary Committee once stood against a court-packing scheme that would have eroded judicial independence,” said Sen. Patrick Leahy, D-Vt., the senior Democrat on the committee. “That was a proud moment. Now, Republicans on this committee are guilty of their own ‘court un-packing scheme’ … The blockade of Chief Judge Merrick Garland was never grounded in principle or precedent.”

Garland is the chief judge of the U.S. Court of Appeals for the D.C. Circuit.

Sen. Dianne Feinstein, D-Calif., also expressed disappointment about the lack of a hearing and vote for Garland.

“Merrick Garland was widely regarded as a mainstream, moderate nominee,” Feinstein said in her prepared opening statement. “However, President Trump repeatedly promised to appoint someone ‘in the mold of Justice Scalia’ and said that the nomination of Judge Gorsuch illustrates he’s ‘a man of his word.’”

“Let the American people choose,” Cornyn said, noting also that Gorsuch would become the only Westerner on the high court.

“In a former life, when I was a practicing attorney, I had the good fortune of appearing before you,” Lee said in a prepared statement. “So, I know from personal experience that you are one of the very best judges in the country. You come to oral argument prepared and you ask probing, fair questions that help you understand the arguments.”

Sen. Dick Durbin, D-Ill., said he is concerned that Gorsuch won’t be independent from Trump.

“We need to know what you will do when you are called upon to stand up to this president,” Durbin said.

Gorsuch himself suggested he would not be beholden to a particular person, party, or ideology:

When I put on the robe, I am also reminded that under our Constitution, it is for this body, the people’s representatives, to make new laws. For the executive to ensure those laws are faithfully enforced. And for neutral and independent judges to apply the law in the people’s disputes. If judges were just secret legislators, declaring not what the law is but what they would like it to be, the very idea of a government by the people and for the people would be at risk.