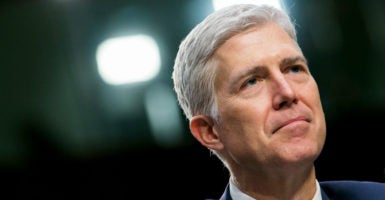 “I ... still expect Judge Gorsuch to be confirmed by 55 to as many as 60 votes,” says Anthony L. François, a senior attorney at the Pacific Legal Foundation. (Photo: Kris Tripplaar/Sipa USA /Newscom)

“Judge Gorsuch showed why he will make an excellent Supreme Court justice,” Elizabeth Slattery, a legal fellow at The Heritage Foundation, told The Daily Signal in an email.

“His mastery of the law, his commitment to being a fair and impartial judge, and his record of taking the text and original public meaning of laws and the Constitution seriously demonstrate why Gorsuch is precisely the kind of justice we need,” Slattery said of Gorsuch.

Judge Kane: "I hope you will judge [@GorsuchFacts] w/ the fairness and integrity with which he himself has served." #SCOTUS #GorsuchHearing pic.twitter.com/V9II827xRF

Anthony L. François, a senior attorney at the Pacific Legal Foundation, says Gorsuch’s commitment to precedent as well as not specifying how he would vote in potential cases will serve the high court nominee well.

“Judge Gorsuch has been very forthcoming with his basic views on the role of the judge in our constitutional order, particularly that it is the judge’s responsibility to interpret and apply the law as faithfully as possible, as it is written and adopted by the Congress,” François said in an email to The Daily Signal, adding:

He has also been very clear in his commitment to precedent and his understanding of it. His refusal to engage in personal commentary on prior Supreme Court decisions was frustrating to Democrat members of the committee, who want to know how he will vote on future cases.

François said he does not anticipate “any substantive reasons for Democrats not to advance his nomination,” despite Senate Minority Leader Chuck Schumer, D-N.Y., announcing Thursday that he will vote against Gorsuch.

During a speech on the Senate floor, Schumer also asked his Democrat colleagues to filibuster.

I’d urge my colleagues to show Judge #Gorsuch the fair consideration he deserves & come together in supporting his nomination. #SCOTUS

“Sen. [Mitch] McConnell has sent clear signals that he will use the available procedural means to proceed to an up-or-down vote on confirmation, including eliminating the cloture requirement for Supreme Court confirmees,” François said, adding that he “would not be surprised if the Republicans are able to draw enough Democrat support to pass a 60-vote cloture motion, and still expect Judge Gorsuch to be confirmed by 55 to as many as 60 votes.”

Todd F. Gaziano, a senior fellow in constitutional law at the Pacific Legal Foundation, told The Daily Signal in an email that liberals would have trouble damaging Gorsuch’s reputation.

“Gorsuch was destined to be confirmed based on his record and capabilities, but his calm demeanor, ultra-politeness, and respect to all the senators will make it practically impossible for liberals to demonize him as an uncaring shill for big business against the little man,” Gaziano said.

John Malcolm, the director of the Edwin Meese III Center for Legal and Judicial Studies and a senior legal fellow at The Heritage Foundation, was similarly optimistic.

“While several Democratic senators have stated that they are prepared to lead a filibuster effort to deprive Judge Gorsuch of an up-or-down vote, I believe that those efforts will fail and that, ultimately, he will be confirmed as the next associate justice on the Supreme Court, as he should be,” Malcolm said in an email to The Daily Signal.

The Senate Judiciary Committee is expected to vote on advancing Gorsuch’s confirmation on April 3.