What a Lesser-Known Opinion Reveals About Neil Gorsuch 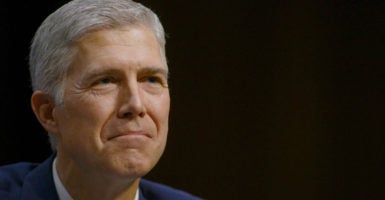 In 2016, Judge Neil Gorsuch wrote a four-page dissent in which he argued that arresting a “class clown for burping was going a step too far.” (Photo: Leigh Vogel/Sipa USA/Newscom)

Much has been made about Judge Neil Gorsuch’s impeccable academic pedigree, judicial record of impartiality, and support of his colleagues from across the ideological spectrum—and for good reason.

Gorsuch has authored approximately 800 judicial opinions since joining the 10th U.S. Circuit Court of Appeals, and several of those decisions were crucial to upholding the constitutional rights of Americans.

Often lost amid the high praise for Gorsuch, however, is one telling dissent that he authored last year. In that dissent, which addressed a case in which a child was arrested for burping in class, Gorsuch demonstrated great humility and common sense.

The case was A.M. v. Holmes. It was this case that Sen. John Kennedy, R-La., said was his favorite of Gorsuch’s rulings that he had read. Kennedy went on to praise the simplicity of Gorsuch’s dissent, saying it “should be required reading in every law school.”

The opinion will almost certainly never be heralded as a landmark case or tour de force on a complex legal doctrine, but it showcases just how thoroughly Gorsuch’s common sense permeates his approach to the law.

Arrested for Burping in Class

The student created a class distraction in the way that only a middle school boy could and was banished to the hallway for his misbehavior.

But that did not stop the class clown from poking his head back into the classroom to let out a giggling belch. One might expect this behavior to culminate in a trip to the principal’s office and a sentence of detention.

But that was not to happen. Instead, a school resource police officer placed the student under arrest “for interfering with the educational process.”

The 13-year-old then spent approximately one hour locked in a juvenile detention facility before he was released to the custody of his mother. He was never charged for his misbehavior.

>>>Burping in Class? You’re Under Arrest.

Following the incident, the boy’s mother brought a civil rights lawsuit against school officials and the arresting officer alleging that the officer did not have probable cause to arrest the belching boy.

This dispute ultimately reached Gorsuch at the 10th Circuit Court of Appeals.

The majority took 94 pages to justify the position that the officer was reasonable in believing a 13-year-old boy violated a New Mexico statute making it a crime to “willfully interfere with the educational process of any public or private school” (N.M. Stat. Ann. § 30–20–13(D)).

Gorsuch, however, took less than four pages in dissent to explain that a reasonable police officer should have understood that arresting a “class clown for burping was going a step too far.”

In coming to this conclusion, Gorsuch found that “the New Mexico Court of Appeals long ago alerted law enforcement that the statutory language on which the officer relied for the arrest in this case does not criminalize ‘noise[s] or diversion[s]’ that merely ‘disturb the peace or good order’ of individual classes.”

Thus, Gorsuch inserted a bit of common sense into the discussion that makes a distinction “between childish pranks and more seriously disruptive behaviors.” Childish pranks, according to Gorsuch, do not justify the arrest of a 13-year-old child.

Applying the Law as Written

In addition to that common sense, Gorsuch shared something else about how he views the role of a judge.

He asserted that “[o]ften enough the law can be ‘a ass—a idiot,’” quoting Charles Dickens, “and there is little we judges can do about it, for it is (or should be) emphatically our job to apply, not rewrite, the law enacted by the people’s representatives.”

Nonetheless, he concluded that unlike his colleagues, “in this particular case, I don’t believe the law happens to be quite as much of a ass as they do.”

>>>A Closer Look at Neil Gorsuch, an Excellent Choice for the Supreme Court

He then paraphrased the late Justice Antonin Scalia, the man he has been nominated to replace:

[A] judge who likes every result he reaches is very likely a bad judge, reaching for results he prefers rather than those the law compels. So it is I admire my colleagues today, for no doubt they reach a result they dislike but believe the law demands—and in that I see the best of our profession and much to admire.

Even in dissent, Gorsuch showed profound respect for his colleagues and reiterated his fidelity to what the law says, not what a judge thinks it should be.

A.M. v. Holmes serves as a light-hearted reminder that not all cases address the most profound issues. But in only four pages, Gorsuch exuded the kind of common sense and humility that, combined with his other superb credentials, make him a fitting addition to the United States Supreme Court.