Burping in Class? You’re Under Arrest 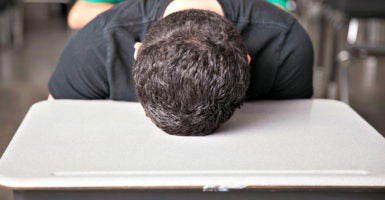 The 13-year-old student was not charged for the burping incident, but he did spend approximately one hour in a juvenile detention center the afternoon of his arrest. (Photo: iStock Photos)

Every school has a class clown. Sometimes that student takes an act of comedy one step too far and garners a detention or, at worst, a suspension for particularly egregious conduct.

According to officials at a New Mexico middle school and a federal appeals court, however, it is also appropriate to place a student under arrest for burping in class.

The case highlights the hazards of overcriminalization, which is when authorities use criminal law and penalties to punish every mistake and to solve every problem—even those as harmless as a 13-year-old kid making burping noises.

Here’s what happened, according to the majority opinion in the case:

On May 19, 2011, in a middle school in Albuquerque, New Mexico, a 13-year-old boy “generated several fake burps, which made the other students laugh and hampered class proceedings.”

Shocking, right? Making this seem even more mundane, the class was physical education, where 13-year-olds usually run off their energy and get out their burps so that they can behave in other classes. But PE was held in a classroom that day, “to facilitate the students’ project presentations.”

When the boy refused to stop making the disruptive sounds, the PE teacher had him sit in a hallway.

Problem solved, right? Wrong. A school resource officer soon came to retrieve the student, who had continued to stick his head into class and burp.

The school resource officer told the boy that he would be arrested “for interfering with the educational process,” a misdemeanor under state law.

While the boy insisted he had done nothing wrong, the resource officer refused to go into great detail over the looming arrest.

The officer was aware he possessed complete discretion on whether to arrest the boy or issue a citation. He believed he had a legitimate basis to arrest the boy based on the PE teacher’s inability to handle “(fake) burping and other specified misconduct,” which “prevented her from controlling her class.”

Six Months in the Slammer

Under New Mexico’s criminal statutes addressing “crimes against public peace,” it is a petty misdemeanor offense to

Under New Mexico’s misdemeanor sentencing statute, a defendant faces up to six months in jail, a fine of up to $500, or both, “in the discretion of the judge.”

The 13-year-old student was not charged for the burping incident, but he did spend approximately one hour in a juvenile detention center the afternoon of his arrest.

Although the criminal statute seems to serve a public purpose of limiting disruptions that would interfere with the learning process, it leaves open the question of what might constitute a sufficient enough disturbance to justify sending a student to jail for up to six months.

Based on the plain language of the statute (the first place that judges, like everyone else, should look when deciding what the law says), any disruption at or near a school arguably could violate this law.

Gone, it seems, are the days of being sent to the principal’s office. Instead, under this New Mexico law, students could be sent to the slammer for talking out of turn.

What the Appeals Court Said

The student’s mother sued school officials and the arresting officer for alleged violations of civil rights, including the claim that the officer lacked probable cause to arrest the boy. The U.S. Court of Appeals for the 10th Circuit, however, sided with the school officials.

And it did so despite the fact that the New Mexico Court of Appeals previously held, in State v. Silva (1974), that a law addressing protests at colleges does not criminalize “noise or diversion” that does nothing more than “disturb the peace or good order” of individual classes.

Instead, the state appeals court explained, the law requires “a more substantial, more physical invasion” of school operations, with proof that the student more “substantially interfered” with the “actual functioning” of the school.

Under this interpretation of the law, an officer would not be justified in arresting a student for a momentary disruption. A student making burping noises in class is not enough to tear down an entire institution, nor to have even the slightest impact on the public peace, making an arrest (and criminalization of the conduct) entirely unnecessary, if not unconstitutional.

This commonsense approach to student burping was rejected, however, by the majority of the 10th Circuit Court of Appeals, which took 94 pages to justify the arrest of the middle school student for burping in class, as well as its own broad interpretation of the law used to reach that result.

The dissenting opinion, meanwhile, takes just four pages to explain why “any reasonable officer in this case” should have known that arresting a “class clown for burping was going a step too far.”

Again, this case highlights the hazards of overcriminalization, using criminal law and penalties to punish even the smallest, most harmless of offenses.

State reforms and several bills pending in Congress detail paths toward repeal or reform of criminal laws that criminalize conduct that no reasonable person would think deserves an arrest.